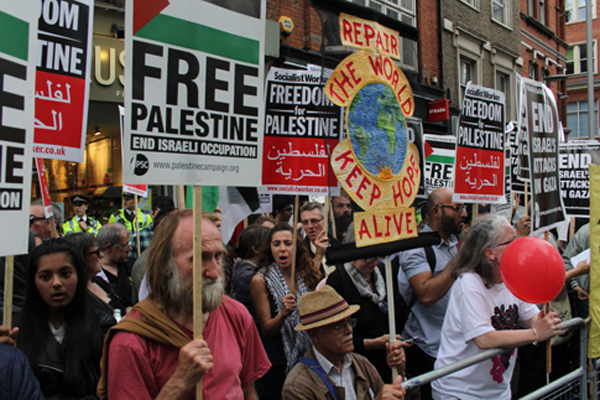 Around 600 pro-Palestine protesters stood on High Street Kensington in West London and chanted slogans including "From the river to the sea, Palestine will be free," and "Free, free Palestine." Some protesters managed to evade the police lines, blocked the main road and staged a die-in. They laid on the floor to signify dead Palestinians.  "We always get people out on the streets when Gaza is attacked," Sam Dathi, national officer for the "Stop the War coalition" -- a U.K. anti-war organization -- told the Anadolu Agency.  "Israel attacking the Palestinians seems like an annual occurrence now, all they need is an excuse," he said.  Hugh Jaeger from the U.K.-based activist group Palestinian Solidarity Campaign said, "Israel’s response to the murder of the three teenagers is grossly disproportionate and violent."
"Israel breaks international law by attacking women and children and destroying homes. This cannot continue," he added. Hundreds of people from across the capital came to join the demonstration. Two Turkish students wrapped in Turkish flags were seen amongst the demonstrators.  Eighteen-year-old Furkan Akyuz said, "We're here to support our Palestinian brothers, we want Israel to end the occupation." Abdullah Ercan, student, stressed the support the Palestinian cause receives from Turkish people. "There is a lot of solidarity with Palestine from the Turkish people, this only increased after what happened on the Mavi Marmara," he said. Israeli commandos killed eight Turks and a Turkish-American national on May 22, 2010 aboard Mavi Marmara -- a Turkish-flagged vessel in a Gaza-bound flotilla challenging the Israeli naval blockade of the Palestinian enclave.
Also in attendance were "Orthodox Jews United Against Zionism," a Jewish group critical of Israel's policies.
Traffic was temporarily drawn to a halt when protesters occupied the main road, but police pushed the protesters to move to allow traffic through. Drivers honked their horns in support of the protesters whilst others took Palestinian flags and placards and hung them from their windows.
The demonstration concluded peacefully and police made no arrests.
Since the settlers' disappearance, Israeli forces have launched a wide-scale arrest campaign in the West Bank, detaining over 500 Palestinians, including lawmakers and former government officials -- as well as a barrage of air strikes on the besieged Gaza Strip.