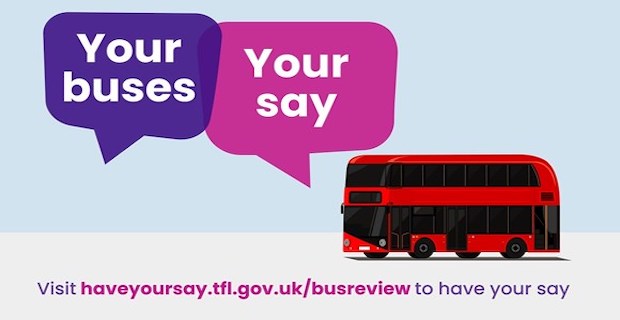 Islington Council is urging local people to have their say on proposed Transport for London (TfL) bus service changes that would significantly affect travel in the borough and central London.

Due to a lack of funding from central Government and fewer passengers travelling since the start of the pandemic, TfL is proposing changes to bus services in London. In Islington, the proposals include cutbacks to key bus services, which would have a big impact on local people’s ability to move around the borough – particularly people with disabilities and people on lower incomes.

The proposals would see sweeping changes to the local bus network, including:

The changes would make it significantly more difficult for local people to access Whittington Hospital, St Bartholomew’s Hospital and Moorfields Eye Hospital by bus, and could lead to children needing to take several buses to get to school.

TfL has launched a consultation on the proposals, which runs until Tuesday, 12 July.

Local people know their streets better than anyone, and Islington Council is encouraging residents to take part in the consultation to ensure their views and any concerns are heard by central Government and TfL. Further information on how to fill in the consultation can be found on TfL’s website.

Islington’s bus services are a vital lifeline for local people. Buses are the cheapest, most accessible form of public transport in the borough, with 16.6% of all journeys in Islington being made by bus.

Islington Council is committed to creating a cleaner, greener, healthier borough, and enabling people to travel in more sustainable ways, including by bus, is key to achieving this. Buses were responsible for just 3% of total greenhouse gas emissions by transport in the UK in 2019, with cars responsible for 68%. Retaining high quality public transport services and encouraging people to use them is therefore vital to the delivery of net zero carbon targets, in Islington and across London.

This week, full council will vote on a motion to Save Islington’s Buses, which includes calling on central Government to agree a long-term funding deal with TfL.

Cllr Rowena Champion, Islington Council’s Executive Member for Environment, Air Quality, and Transport, said: “Buses are vital to our borough. They are the cheapest and most accessible form of public transport, and local people rely on them every day. But TfL is the only capital transport network that doesn’t receive any grant from central government and the delays to a funding deal are putting our buses at risk.

“The cost of living crisis, the climate emergency, and the ongoing recovery from the Covid-19 pandemic have made bus services more important than ever, as an accessible, cost-effective, and more sustainable alternative to cars.

“We all need to play our part in saving Islington’s bus services, and the council is continuing to call on central Government to agree a long-term funding deal with TfL to protect key services. Local people also have a vital role to play, and that is why we’re encouraging people across the borough to take part in TfL’s consultation, to ensure their views and concerns are heard.”

In Islington, the proposals would involve the following changes to services in the Caledonian Road and Euston Road areas:

Keywords:
IslingtonLondonTransport For LondonTfl
Your comment has been forwarded to the administrator for approval.×
Warning! Will constitute a criminal offense, illegal, threatening, offensive, insulting and swearing, derogatory, defamatory, vulgar, pornographic, indecent, personality rights, damaging or similar nature in the nature of all kinds of financial content, legal, criminal and administrative responsibility for the content of the sender member / members are belong.
Related News