Saturday 27 February saw the scheme’s busiest ever winter day, with more than 52,000 hires. 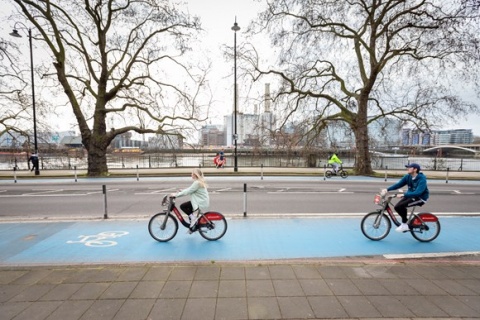 The 100 millionth journey was made on a Santander Cycle on Saturday 6 March. Saturday 27 February was the busiest ever winter day for the scheme. Free Santander Cycles codes given to NHS staff and key workers redeemed more than 100,000 times. Transport for London’s (TfL’s) popular Santander Cycles scheme passed 100 million hires earlier this month, marking a significant milestone in the scheme’s ten-year history. This equates to more than 10 rides for every Londoner and follows record-breaking hires in February.

Saturday 27 February saw the scheme’s busiest ever winter day, with more than 52,000 hires. The following day there were 31,474 hires, making it the busiest February weekend in the scheme’s history. This followed hire numbers for 2020 surpassing 2019* by around 6,000 hires – despite a significant overall reduction in journeys across London during the pandemic.

Hires in 2020 made up 12 of the top 15 busiest days** in the scheme’s history, demonstrating that Santander Cycles played an even more crucial role in keeping London moving during the coronavirus pandemic as more people have chosen cycling for both exercise and transport. Recent TfL figures show that 24 hour Santander Cycles membership registrations rose by 167 per cent in the year to December 2020, representing the largest increase in the scheme’s history. Meanwhile, registrations for new annual memberships increased by a quarter.

Santander Cycles continue to support NHS staff and key workers by offering free cycle hire access codes and to date these have been redeemed more than 100,000 times and used by more than 18,000 people.***

Will Norman, London’s Walking and Cycling Commissioner, said: “London’s cycle hire scheme has become an integral part of our city and the past year has shown that it is more important than ever to Londoners. Reaching 100 million hires is a significant milestone - I’m thrilled that so many people are enjoying the benefits cycling brings and making the most of our rapidly expanding network of safe routes, including our incredible key workers. We have been delighted to support them by offering free Santander Cycles hires throughout the pandemic.”

Nathan Bostock, CEO, Santander UK, said: “It’s fantastic that Santander Cycles continues to break records, demonstrating the important role the scheme plays in keeping communities connected and mobile in a sustainable way, particularly during this challenging time. We’re delighted that among those using the scheme were thousands of key and critical workers who we’ve been supporting with free journeys during the pandemic. With the gradual easing of restrictions, we look forward to the scheme continuing to play a part in helping people and businesses across London to prosper.” 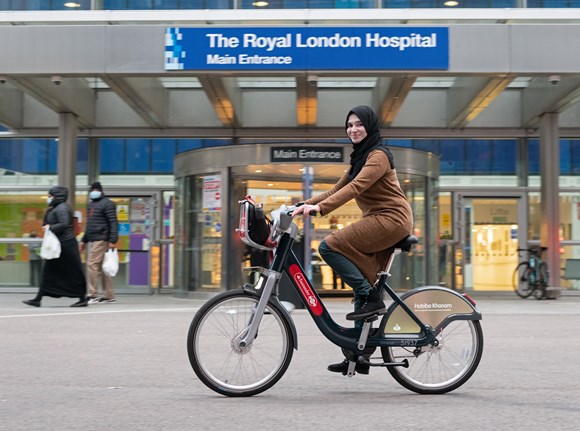 David Eddington, TfL's Head of Cycle Hire, said: “Our bikes have now been hired more than 100 million times – equating to more than 10 rides for every Londoner – demonstrating yet again that demand for cycling in our city continues to rise. We look forward to expanding and improving our offering in the years to come, so even more Londoners and visitors can discover the benefits of cycling in the capital.”

To celebrate its tenth anniversary year, TfL and cycle hire scheme sponsor Santander awarded a free annual membership to a dedicated cycle hire user for each month of 2020 as well as naming a bike in their honour. Nurse Habiba Khanam was one of the Cycle Hire 10 competition winners and talks about how Santander Cycles support her to do her job.

Habiba Khanam, NHS nurse, said: “What a tough year it has been for all of us, especially for my colleagues in the NHS. Looking after our wellbeing has never been more important. I’m so grateful to be able to cycle safely to and from the hospital where I work with Santander Cycles. A big thanks to TfL for offering NHS workers free cycle hire access during the pandemic – it’s been so helpful for so many of us.”

Santander Cycles can be hired from as little as £2 a day for an unlimited number of 30-minute journeys. More than half of cycle hire users in London today say they started cycling because of the scheme.

Keywords:
Santander CyclesFree SantanderNHS StaffSantander Cycles Scheme
Your comment has been forwarded to the administrator for approval.×
Warning! Will constitute a criminal offense, illegal, threatening, offensive, insulting and swearing, derogatory, defamatory, vulgar, pornographic, indecent, personality rights, damaging or similar nature in the nature of all kinds of financial content, legal, criminal and administrative responsibility for the content of the sender member / members are belong.
Related News