Barking Riverside Extension to open this summer, ahead of schedule 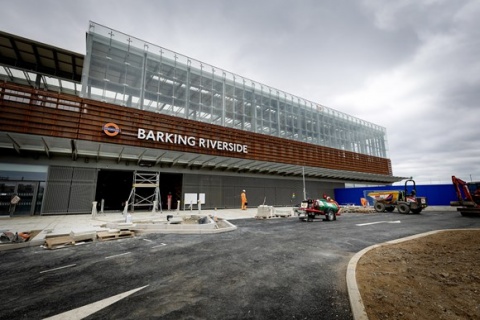 Customers will be able to reach Barking Riverside by train earlier than planned.Driver training and route testing continue to ensure customers have a reliable service from day one
Project supply chain has supported skills and jobs across the country.Local residents and visitors to Barking Riverside will soon benefit from quicker and easier journeys with the confirmation that Barking Riverside will become the capital’s newest railway station this summer, ahead of schedule. Transport for London (TfL) has been able to bring forward the launch of London Overground services to Barking Riverside, originally planned for the autumn, following good progress being made in the completion of the station commissioning and testing stages.

Residents can already see trains running between Barking and Barking Riverside while route testing and driver training takes place by Arriva Rail London, which operates the London Overground on TfL’s behalf. This is a major milestone for the project and one of the final steps ahead of welcoming customers for the first time. Barking Riverside station, which appeared on the Tube map for the first time in May, adds to London’s growing number of step free stations – helping to make the capital a more accessible city for everyone.

Investment in transport benefits the whole country - from supporting jobs and businesses across the country to ensuring supply chains and manufacturers are able to retain the skill base and resources to easily and affordably satisfy transport projects in other regions. Businesses from around the UK have benefited from the Barking Riverside Extension. Throughout construction, the project’s supply chain has supported businesses of all sizes with skills and job creation seen across the whole country.  This includes steelwork from Scotland and the East of England, precast concrete from the North West and Northern Ireland and innovative slab track from the East Midlands.

Keywords:
Barking RiversideLocal Residents And Visitors To Barking Riverside
Your comment has been forwarded to the administrator for approval.×
Warning! Will constitute a criminal offense, illegal, threatening, offensive, insulting and swearing, derogatory, defamatory, vulgar, pornographic, indecent, personality rights, damaging or similar nature in the nature of all kinds of financial content, legal, criminal and administrative responsibility for the content of the sender member / members are belong.
Related News