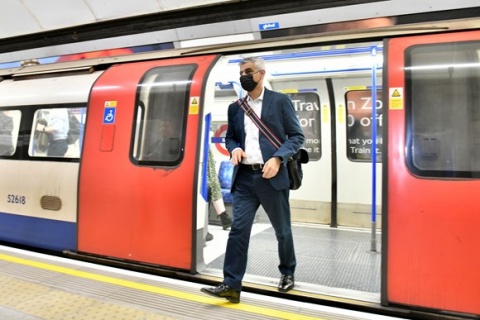 Bank station’s new, spacious southbound Northern line platform and concourse officially opened to customers this morningThe Bank branch of the Northern line has fully re-opened, as planned, following closure for upgrade works at Bank station.Final stages of work at Bank station will be completed by the end of the year, including step-free access to the Northern line, a new station entrance and new, more direct interchanges between the DLR, Northern and Central lines.Once complete, the vastly improved Bank station will have 40 per cent greater capacity, and customer journeys will be much quicker and easier.The Mayor of London, Sadiq Khan, today (Monday 16 May) re-opened the Bank branch of the Northern line following a 17-week planned closure. The closure enabled around 550 construction staff to work around the clock to finish constructing a brand-new Northern line tunnel and passenger concourse at Bank Underground station. A new, wider southbound Northern line platform has also opened at Bank station – all key parts of this vital capacity upgrade project. Transport for London (TfL) also completed work on three new passageways, which will make moving around the station quicker and easier for Northern line customers.Bank station will see its capacity increased by 40 per cent when upgrade work finishes later this year, with improvements still to come including step-free access to the Northern line, improved access to the DLR platforms, two new moving walkways, 12 new escalators and two new lifts. There will also be more direct routes within the station and a new station entrance on Cannon Street. These improvements to Bank station will support the recovery, growth and success of the City of London, addressing long-standing capacity issues and making journeys through Bank quicker, easier, and more comfortable when fully complete.Around 650 train drivers and more than 100 station staff have taken part in exercises to familiarise themselves with the new tunnel and vastly improved station layout. Northern line customers using Bank station from today should follow the new signage and directions from London Underground staff.

The Mayor of London, Sadiq Khan, said: “Today marks the first in a series of transport milestones for our city. The Northern line has fully reopened to customers, on-schedule and to budget, after the successful completion of the latest phase of vital upgrade works at Bank station.“Bank Station is at the heart of the city and these improvements are the first step towards a modern, accessible, easy to navigate station fit for the twenty-first century. “We are at a pivotal moment in London’s recovery, and it’s clearer than ever the critical role TfL plays in boosting our economy. It is time that the Government finally accepts that a properly funded transport network in London is an issue of great national importance. Ministers must commit to a long-term funding deal that will protect the capital’s world class transport network and support jobs and growth in London and across the whole country.”

Stuart Harvey, Chief Capital Officer at Transport for London, said: "From today, Northern line customers at Bank station are able to use a new, 5m wide southbound platform and spacious concourse. The old layout was very constrained, leading to frequent congestion, but Northern line customers will now be able to make their journeys much more quickly and easily. I’d like to thank our customers for their patience while the Bank branch of the Northern line was closed, which was essential in enabling us to complete this work. Our construction teams were totally focused throughout the planned closure, which was in place for 120 days, on fully re-opening the Northern line on time. The countdown is now on for finishing the rest of this complex major upgrade later this year, transforming Bank into a modern, flagship station, fit to serve one of the world’s most important financial districts.”

Work that has been completed at Bank station during the closure period includes:

Completing the excavation of the remaining 100m of new railway tunnel and lining it with sprayed concrete, in addition to the 1.5km that had already been tunnelled
Connecting the new southbound Northern line tunnel to the existing railway
Conversion of the former southbound Northern line platform, which was built more than 100 years ago, into a new, spacious customer concourse
Installing the remaining 185m of track in the tunnels, in addition to the 490m that had already been laid prior to the closure
Installation, testing and commissioning of all the signalling systems needed to operate trains into the new southbound platform
Fitting out all areas of the new station, including installing over 1,400m2 of terrazzo tile flooring and more than 1,000 wall panels
The installation, testing and commissioning of a new station communication and fire system along with new and improved lighting and signage throughout all the new station areas
The next phase of works at Bank station will now turn to the key interchange connections which includes the three new escalators linking the Northern line to the DLR, and the two new moving walkways and three new escalators connecting the Northern and Central lines. Bank already has 15 escalators so will have 27 escalators once the works are complete, the largest number on the Tube network.

Wayfinding at Bank station is being improved to make it easier and more intuitive to navigate around the station. Improvements include installing new signage and contrast cladding between interchange corridors and platforms. A new platform hump has been installed on the northbound Northern line platform and the newly constructed southbound Northern line platform has been raised to provide level access between the train and the platform.

Keywords:
Bank Stations NewBank StationNorthern Line PlatformUnderground PlatformLondon
Your comment has been forwarded to the administrator for approval.×
Warning! Will constitute a criminal offense, illegal, threatening, offensive, insulting and swearing, derogatory, defamatory, vulgar, pornographic, indecent, personality rights, damaging or similar nature in the nature of all kinds of financial content, legal, criminal and administrative responsibility for the content of the sender member / members are belong.
Related News