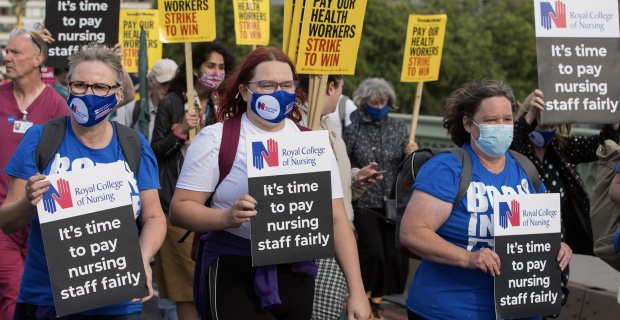 UK nurses on Thursday, December 15, begin an unprecedented strike as a "last resort" in their fight for better wages and working conditions, despite warnings it could put patients at risk.

Up to 100,000 members of the Royal College of Nursing (RCN) in England, Wales and Northern Ireland are holding a one-day stoppage from 8 am to 8 pm GMT after rejecting a government pay offer.

Ameera, a senior nurse in London, told Agence France Presse (AFP) that "we have not chosen industrial action lightly". The strike is the first in the Royal College of Nursing union's 106-year history. "We're tired. We're fed up," added the nurse, who asked that her last name not be reported. "We need a pay rise now to make a living."

The UK is currently grappling with a cost-of-living crisis as spiraling inflation outstrips wage growth. Union leaders and health workers also said nurses were being overworked due to staff shortages, as the state-run National Health Service (NHS) battled a backlog in appointments made worse by cancellations during the pandemic.

Chemotherapy, dialysis, intensive care and high-dependency units, as well as neonatal and pediatric intensive care, will be protected. But other services will be reduced to Christmas staffing levels during the walk-out, the RCN said.

Health chiefs warned unions that care levels could suffer because of the walkout, just as seasonal respiratory conditions such as flu add pressure on already stretched services. Cally Palmer, national cancer director for England, called on the union to exempt cancer surgery from the walkout, while England's chief nursing officer expressed concern over the strike staffing plans.

"We hear from our colleagues that they are concerned by the assumption, implied by the RCN, that night duty staffing on day duty is safe," Ruth May wrote in a letter to the RCN. "Ward activities during the day are very different to those at night. This decision has the potential to significantly impact on the safety of patient care (for example, by impacting delivery of intravenous antibiotics on time, patient observations and medication rounds)," she added.

The RCN's industrial action is part of a growing wave of stoppages by public and private sector employees. Healthcare unions say their members are skipping meals, struggling to feed and clothe their families, and leaving the NHS in droves. But successive below-inflation awards since 2010 have left experienced nurses worse off by 20% in real terms, they say.

The RCN wants a pay rise significantly above inflation which surged to a 41-year high of 11.1% in October, falling slightly to 10.7% last month. The government maintains the demands are unaffordable and Health Secretary Steve Barclay called the strikes "deeply regrettable".

Keywords:
UK NursesStrikeUk Nurses StrikeNHS
Your comment has been forwarded to the administrator for approval.×
Warning! Will constitute a criminal offense, illegal, threatening, offensive, insulting and swearing, derogatory, defamatory, vulgar, pornographic, indecent, personality rights, damaging or similar nature in the nature of all kinds of financial content, legal, criminal and administrative responsibility for the content of the sender member / members are belong.
Related News