Rebecca Wilkinson flew to Turkey to have surgery that she says changed her life ! Psychic predicted she'd 'die' without drastic action

Rebecca Wilkinson, 30, from Derbyshire weighed 28st 12lbs at her heaviest - but underwent a gastric sleeve operation in 2020 that she said "changed her life" 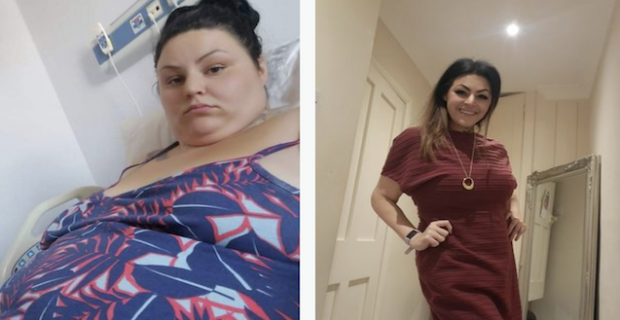 By Katie Pearson/Mirror-Rebecca Wilkinson, 30, from Derbyshire weighed 28st 12lbs at her heaviest - but underwent a gastric sleeve operation in 2020 that she said "changed her life".A woman flew to Turkey to have her stomach removed before losing more than 16-and-a-half stone after a psychic predicted she would die without drastic action.Rebecca Wilkinson, 30, started putting on weight in her teens and saw her weight rocket after falling pregnant with her child at 18 - piling on nearly 10 stone in just under two years.She would often indulge in two takeaways a day followed by snacks like chocolate, crisps, and sweets - washed down with litres of Lucozade. 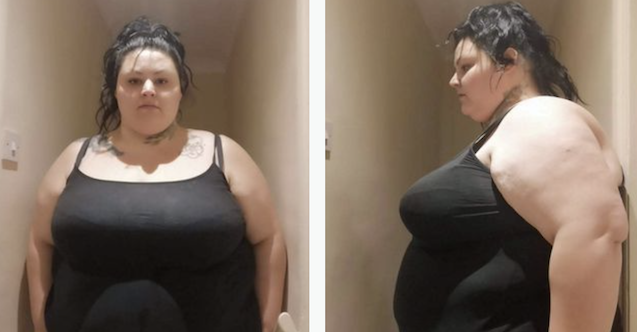 At her biggest, Rebecca was defined as obese - weighing 28st 12lbs and was struggling to squeeze into a size 28-30.

After years of dieting the mum-of-one saw no changes until a trip to a psychic "scared" her into action.

He revealed she had "no future" if she carried on her unhealthy habits and told her to "do whatever it takes or die".The bombshell kicked-started her weight loss journey and she booked a flight to Antalya, Turkey, to undergo a private gastric sleeve operation in September 2020.A year after the operation to remove part of her stomach, she lost a staggering 16st 7lb - slimming down to 12st 5lb and a svelte size 10-14.Rebecca, an apprentice plasterer, from Ilkeston, Derbyshire, said: “I was desperate after years of trying and failing to lose weight. 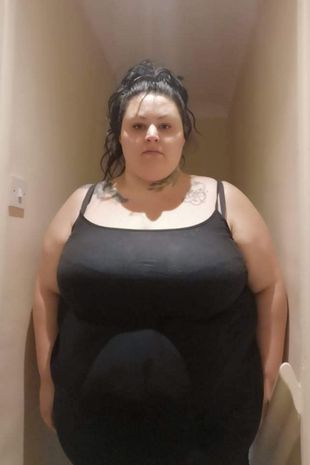 “During a visit to my psychic, he scared me into action. He said he saw 'no life' for me on the cards.

“He also said: 'Do what it takes - go to the extreme or you will die.' I knew I had to take drastic actions and surgery was the only way.“The weight has fallen off after having my stomach removed - it’s turned my life around.”She saw the weight start piling on, especially after she fell pregnant with her first child, Libby, 12.The mum would often tuck into a takeaway for lunch and dinner - followed by snacks.She said: “I went to an all-girls school, and I was bullied really badly."In school, they nicknamed me 'Rebecca double-decker' because I was bigger than the others girls. I definitely ate to feel better.“I’d start the day with four pieces of buttered toast, and if I was peckish at midmorning, I’d easily repeat this.“For lunch, I’d get a takeaway and dinner every single night was a takeaway as well.”As her weight spiralled out of control, Rebecca struggled with her mental health and suffered from anxiety and depression. 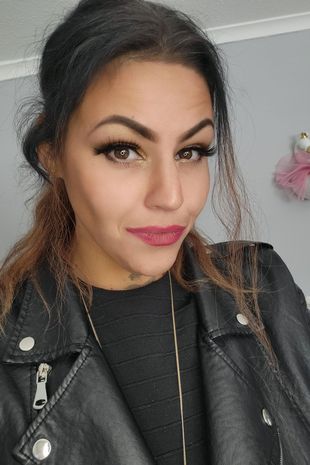 She hoped for another baby with her partner of 16 years, Matt, 34, who owns a plastering company, but struggled to conceive for the next 12 years due to her weight.

At her biggest, she weighed a whopping 28st 12lbs and struggled to fit into a size 28.She said: “For years I tried to ignore the mess I was in. I wouldn’t leave the house without my mum or fiancé by my side.“I was selective over where I went in case I didn’t fit in the seat or the toilet cubicle. I even had people shouting profanities at me from passing cars."Rebecca tried and failed to diet over the years and was left feeling ‘defeated’.She was ready to "give up" when a trip to visit a psychic in 2020 changed everything.According to Rebecca, he couldn’t see a future for her in the cards and told her to ‘sort it now’ or she would die.“I was sceptical of the psychic at first, but he knew things no one else did,” she said."The way he knew about how I’d eat and ‘hibernate’ afterwards.“I left the reading in tears, but it was important I did. He said: 'I don’t see any life left for you.' It was the wake-up call I needed to change.” 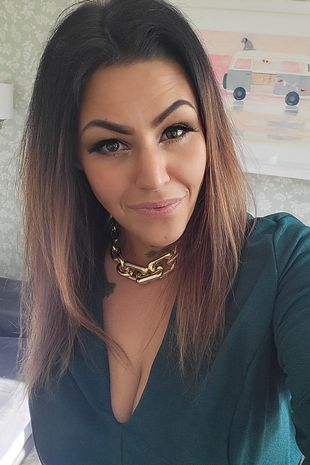 After the reading, Rebecca looked into private surgery for a gastric sleeve in the UK, but it would cost upwards of £12,000. 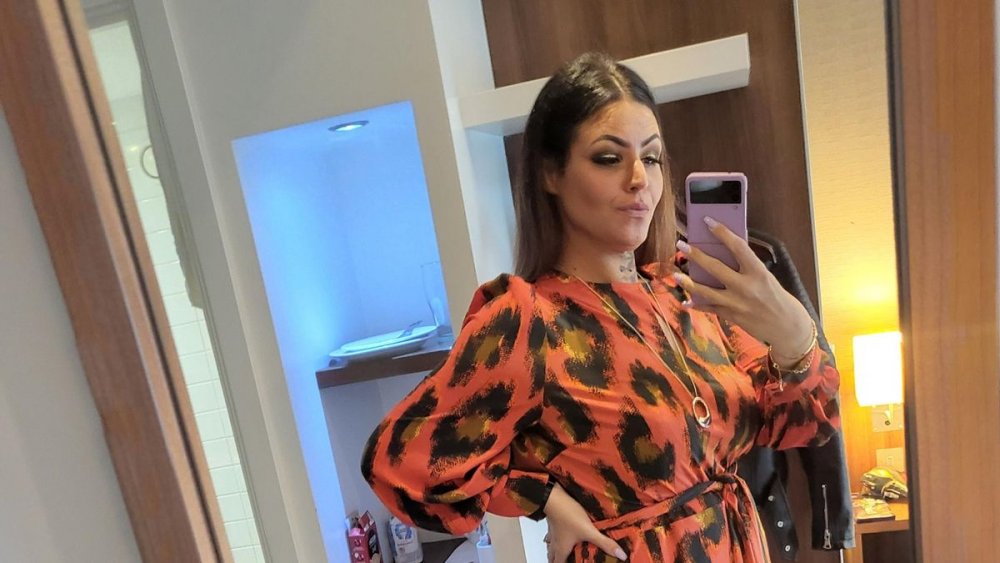 She found the operation abroad in Turkey costing a fraction of the price - £3,000 - and flew over in September 2020 with her mum, Jayne Nunn, 47, who also underwent the surgery.

The operation involved removing three-quarters of the stomach and the remaining amount formed a 'sleeve' or tube that lead to the intestine.After the surgery, Rebecca flew back to the UK and had to survive on a diet of liquids, purees, and soft foods for a month before being able to eat solid food again.Rebecca continues: "My mum came with me and was such a big support. It all went well but it was a lot to adjust to with my new diet."Now I can only eat small amounts every two hours - like a Babybel or a small bit of protein like a salmon fillet."For dinner, I'll usually have a very small portion of whatever I've cooked for the family. I don't feel hunger or miss food."Over a year, Rebecca said the weight "fell away" and she lost a whopping 16st 7lb, slimming down to 12st 5lb. 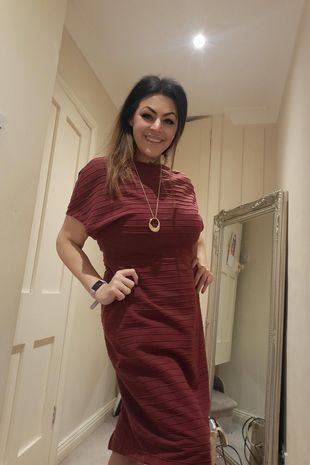 She now wears a size 10-14 and said she's had a whole new lease of life.Her mum Jayne also lost a staggering 13 stone after the surgery.Rebecca said: "The weight has fallen off me - it's been amazing. Mum did an incredible job as well."We're hoping to return to Turkey for another surgery to remove the excess skin."I gave up my work from home job and now I'm an apprentice plasterer. I enjoy super long walks, going out and socialising which I never imagined would be possible."Most importantly, I'm able to move around and live pain-free. Hopefully, the weight loss will help with my fertility and having another baby. It's changed my life."

Keywords:
Turkey SurgeryRebecca WilkinsonChanged Her LifeFlew To TurkeyGastric Sleeve Operation TurkeyDerbyshireSize 30 Woman Flew To Turkey
Your comment has been forwarded to the administrator for approval.×
Warning! Will constitute a criminal offense, illegal, threatening, offensive, insulting and swearing, derogatory, defamatory, vulgar, pornographic, indecent, personality rights, damaging or similar nature in the nature of all kinds of financial content, legal, criminal and administrative responsibility for the content of the sender member / members are belong.
Related News