Matt Hancock confirms that Greater London and parts of Essex and Hertfordshire are being moved into Tier 3 restrictions. 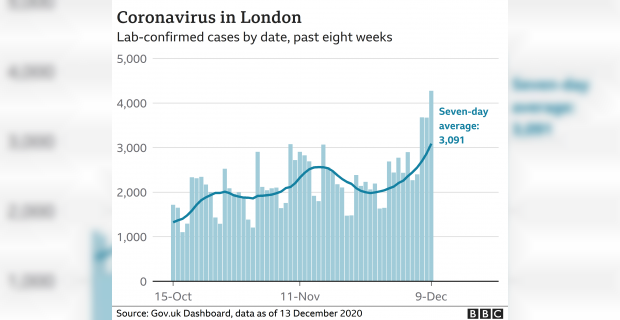 London, most of Essex and parts of Hertfordshire will move into England’s highest tier of Covid restrictions, Health Secretary Matt Hancock has said. The areas join tier three at 00:01 GMT on Wednesday, meaning some 34 million people will face the toughest rules.A new variant of coronavirus has been identified that "may be associated" with the faster spread in southern England, Mr Hancock added.
Pubs and restaurants in tier three must close except for takeaway and delivery. Also under the rules, sports fans cannot attend events in stadiums, and indoor entertainment venues - such as theatres, bowling alleys and cinemas - must remain shut.

The health secretary told a Downing Street briefing that action had to be taken immediately - before the next scheduled review of England's three-tier system on Wednesday - to slow "sharp, exponential rises" in infection, adding that in some areas the virus was doubling around every seven days.Speaking alongside England's chief medical officer Prof Chris Whitty and Prof Kevin Fenton, London regional director for Public Health England, Mr Hancock warned that hospitals across the capital and in Essex and Kent were already "under pressure". He described the rise in transmission and the new variant as "a salutary warning for the whole country". "This isn't over yet," he said. 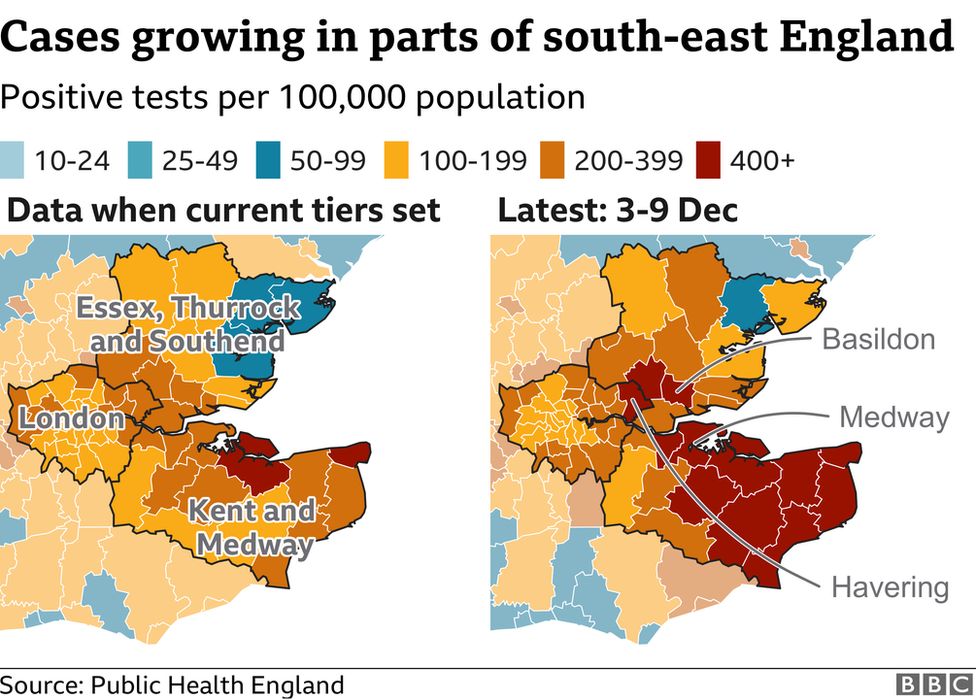 With Kent, Medway and Slough already under tier three rules, it means large parts of south-east England will soon join much of the Midlands, north-west England and north-east England under the strictest curbs on social contacts. More than 34 million people in England will be in tier three when the changes come into effect: 21.5 million in tier two; and about 700,000 in tier one.

The move comes as another 20,263 cases have been recorded and a further 232 people have died in the UK, the government said on Monday.

Prof Whitty warned cases in some areas could rise "very rapidly" by Christmas - without action to combat the current doubling rate.
But he stressed it was "possible to turn this around with the tools we have", highlighting how areas such as Liverpool have successfully brought infection rates down.
Prof Fenton said it was a "pivotal moment" for London and parts of south-east England, which was why the government had had to take "quick and decisive action".
Asked whether the government should rethink plans to ease some restrictions for Christmas, Mr Hancock said it was important "everyone is cautious" ahead of the festive period, especially when meeting vulnerable people."But we do understand why people do want to get together with their families," he said.

Earlier, Mr Hancock told MPs there was currently nothing to suggest that the new virus variant was more likely to cause serious disease. His advice was that it was "highly unlikely" the mutation would fail to respond to a vaccine.

Despite coronavirus cases continuing to rise, No 10 said the government "has no plans to review the Christmas guidelines" which effectively suspend the tier system of restrictions and allow more households to mix.

In Scotland, people have been told to "cut down" the number of contacts in the week before Christmas if they plan to meet up with relatives.
In Wales, a second health board has suspended non-urgent care amid a continued rise in cases. And a leading doctor in Northern Ireland said its health service is facing a "nightmare" scenario in January.

Keywords:
LondonLondon To Move Into Tier 3Coronavirus Pandemic LatestTier 3Covid: London
Your comment has been forwarded to the administrator for approval.×
Warning! Will constitute a criminal offense, illegal, threatening, offensive, insulting and swearing, derogatory, defamatory, vulgar, pornographic, indecent, personality rights, damaging or similar nature in the nature of all kinds of financial content, legal, criminal and administrative responsibility for the content of the sender member / members are belong.
Related News