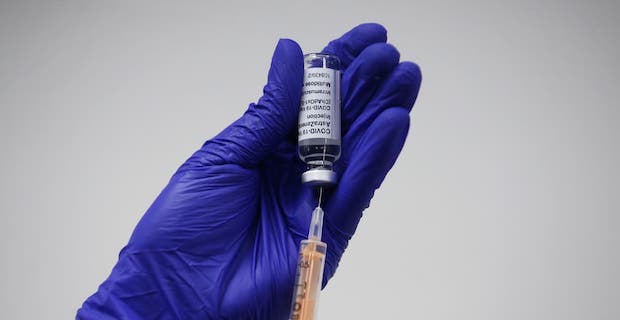 England will now start giving COVID-19 vaccine shots to people aged 45 and over as the government has met its target of vaccinating the top nine priority groups, officials said on Tuesday. Authorities were aiming to give a first vaccine dose to all people in the top nine priority groups by April 15. The target, however, was achieved two days before the deadline on Monday, allowing the National Health Service (NHS) to begin the second phase of the inoculation program earlier than planned.

“I’m delighted that across the UK, we’ve met our target to offer a vaccine to everyone in the top 9 priority groups, ahead of the deadline of April 15,” Health Secretary Matt Hancock said in a statement.

“We’ve now delivered a first dose to over 32 million people, and are on track to offer a vaccine to all adults by the end of July.”

He said authorities have now “opened up invitations to get a vaccine to all aged over 45” and will “proceed to everyone aged over 40 in line with supplies.”

On Tuesday, the Joint Committee on Vaccination and Immunization (JCVI) published a joint statement with its final advice for the next phases of the vaccination program, saying that that the most effective way to combat the virus was to continue prioritizing people by age.

According to the JCVI’s recommendation, the second phase of the immunization drive will target people aged between 40 and 49, followed by people between 30 and 39, and then individuals aged 18 to 29.

“All 4 nations of the UK have agreed to follow the JCVI’s recommended approach, with the understanding that age is assessed to be the strongest factor linked to mortality, morbidity and hospitalizations, and because speed of delivery is crucial as we provide more people with protection from COVID-19 across the UK,” read the statement.

England started its rollout of the Moderna vaccine on Tuesday, joining Wales and Scotland.

This is the third vaccine to be used in the country after the AstraZeneca and Pfizer jabs.

The vaccine will be offered at 21 sites across England and will be used as an alternative to the AstraZeneca jab for people under 30.

This follows an investigation by the UK’s Medicines and Healthcare products Regulatory Authority (MHRA) that found a possible link between the AstraZeneca vaccine and rare blood clots, and advised young people to seek alternative shots.

With the introduction of a third jab, experts have said that people will eventually have to “mix and match” vaccines as authorities across the country cannot guarantee to offer the same jab twice to people.

Trials involving mixing vaccines are currently ongoing and it is not yet clear whether the practice could have any negative side effects.

“It’s practically going to have to be that way because, once you’ve completed a course of, say, the Moderna or Pfizer or the AstraZeneca with two doses, in the future it’s going to be quite difficult to guarantee you get the same type of vaccine again,” Prof. Jeremy Brown, a member of the JCVI, said on BBC Radio 4's Today program.

Keywords:
COVID-19EnglandAstraZeneca
Your comment has been forwarded to the administrator for approval.×
Warning! Will constitute a criminal offense, illegal, threatening, offensive, insulting and swearing, derogatory, defamatory, vulgar, pornographic, indecent, personality rights, damaging or similar nature in the nature of all kinds of financial content, legal, criminal and administrative responsibility for the content of the sender member / members are belong.
Related News