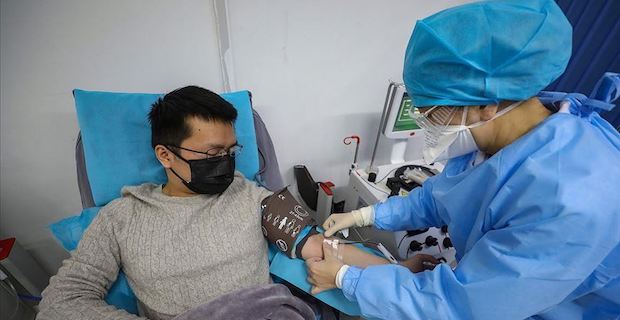 The number of recovered patients infected with the novel coronavirus picked up, health authorities in China said on Wednesday. More than 1,800 individuals infected by the virus were released from hospitals across China on Tuesday after full recovery, the state-run news agency Xinhua News reported, citing the National Health Commission. The number is higher than new confirmed 1,749 cases the same day for the first time since the outbreak of the disease in the central Wuhan city last December.

The virus, officially known as COVID-19, has so far claimed 2,005 lives in China, according to the latest data.

Four deaths -- one each in Philippines, Japan, Taiwan and France -- have also been attributed to the virus said to have been transmitted to humans from animals, particularly bats.

To combat further spread of the disease, which has spread at least 25 other countries, Beijing deployed thousands of military personnel in Wuhan as well as the capital to help with medical aid.

Many countries, including Turkey, evacuated their citizens from the mainland, placing them under two-weeks' isolated medical care.

The World Health Organization (WHO) declared the outbreak an international health emergency.

Meanwhile in Japan, evacuation of 3,700 people aboard the virus-hit cruise ship -- Diamond Princess -- has started after 14-day quarantine.  The island country's Health Ministry said there was no need to further isolate the passengers, who belonged to at least 56 countries.  According to Tokyo-based Kyodo News, the first group of some 500 people tested negative for the virus were disembarking the ship, a process which can take up to three days.

Those who tested negative but were in cabins with infected people will, however, have to remain on board for additional quarantine.

The cruise ship was moored off Yokohama province, south of the Japanese capital.

Authorities in South Korea said that the number of people infected by the virus rose to 46, with 15 new cases reported. Health officials believe that a 61-year-old infected patient transmitted the virus to at least 11 others.

Keywords:
ChinaCoronavirusRecovery
Your comment has been forwarded to the administrator for approval.×
Warning! Will constitute a criminal offense, illegal, threatening, offensive, insulting and swearing, derogatory, defamatory, vulgar, pornographic, indecent, personality rights, damaging or similar nature in the nature of all kinds of financial content, legal, criminal and administrative responsibility for the content of the sender member / members are belong.
Related News