Who are the 55 bodies buried at the Dozier school 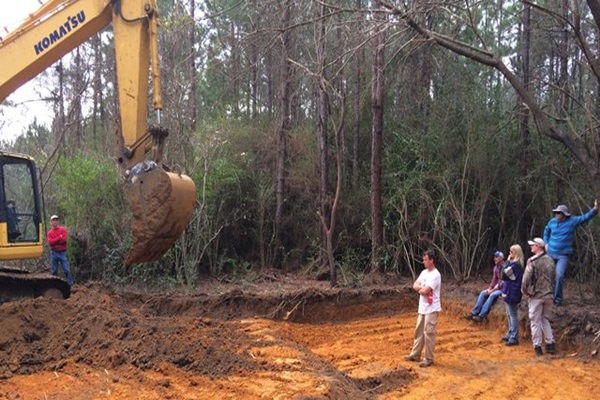 Forensic anthropologists are disinterring the remains of children at a Florida reform school. Former students hope the dig will provide answers about alleged child abuse within the school's walls. Within the past year, anthropologists working for the University of South Florida (USF) have exhumed the remains of 55 children on the grounds of the now-shuttered Arthur G Dozier School for Boys. The boys were buried in simple coffins in the Boot Hill cemetery section of the school. The remains were recovered along with items like belt buckles, buttons, and in one case, a marble. From 1900-2011, the Dozier School in Marianna, Florida, was a state-run reform school for boys who found themselves in trouble - whether stealing cars, skipping school, or in the case of some children as young as one, needing an orphanage when none was available. 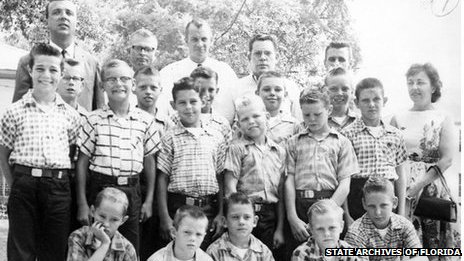 In the past decade, hundreds of men have come forward alleging abuse and neglect on the part of the school - specifically, horrible beatings given out at a small white building on campus. "There was blood on the walls, blood on the mattress I was on, blood on the pillow," says Alan Sexton of his time in the building the boys called the White House. "It smelled to high heaven. They turned on a great big industrial fan to keep people from passing by to hear the screams." Sexton was a student at the Dozier School in 1957. He was only taken to the White House once, and given 37 licks for making unapproved phone calls. But other men, like Jerry Cooper, the president of an advocacy group called White House Boys, reportly received over 100 lashes It was the stories told by the White House Boys, who mainly attended the school during the 1950s and 1960s, that drew attention to Dozier and helped attract Erin Kimmerle, a USF forensic anthropologist, to the site. Specifically, she was drawn to the stories of family members desperate to locate their loved ones' remains. 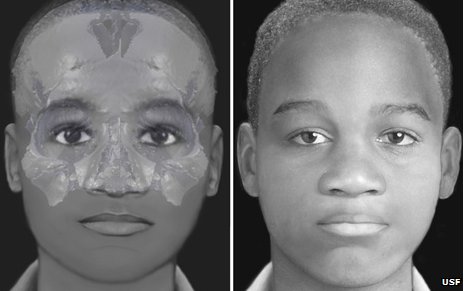 A facial recognition image created by the University of South Florida. The boy is between 10 and 12 years old.

Most of the records of deaths at the school did not list a cause. Boys died in a fire and a flu epidemic, and sometimes the poor and poorly educated parents were told that their sons died in accidents or in fights. Often, the remains were sent home to be buried with families. But sometimes, families were notified of a relative's death and told that the body had been interred at the school. When they went to visit, the school did not provide the exact location of the plots nor give details about the deaths. According to Kimmerle, the school did not keep a master list for the burial ground. There was no policy for its upkeep and care. 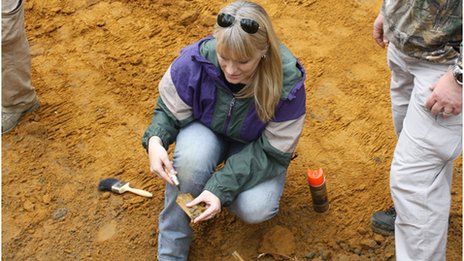 Erin Kimmerle examines an object in the field

"It's their desire to have the remains back to bury them next to their parents," says Kimmerle of the surviving relatives. "It wasn't something that was an option in the past when the deaths occurred. We feel it's very important to support them in that effort." Using archaeological field methods, Kimmerle and her team estimated that about 50 students would be buried at the site - an increase from the 31 estimated by the state in 2009. "In terms of that initial work, we were close," she says. "Who they are specifically and what happened to them, we just don't know that." The USF investigation is focused on finding those who had family members buried at Dozier so they can collect DNA and try to match remains, a task done in collaboration with the University of North Texas Health Sciences Center. 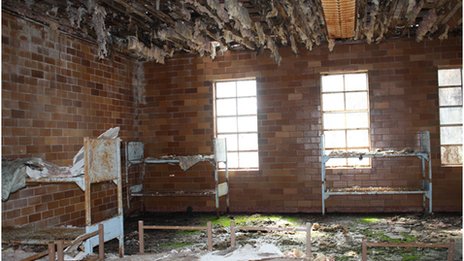 The school closed in 2011. Some buildings are maintained by the state, but others have fallen into disrepair

To this end, they have put out a list of known boys buried in the cemetery. So far, they have been able to track down relatives of 18 of these boys. This week, they released a composite sketch based on the skull of one of the bodies they recovered, to put a human face on their efforts, Kimmerle says. In 2010 a state investigation into the school found "no tangible physical evidence" to "either support or refute allegations of physical or sexual abuse" during the White House boys era. The following year, the government shut down the Dozier school, citing economic factors. Around the same time, the US Department of Justice released a report which says it found "harmful practices... that threatened the safety and wellbeing of youth" at Dozier and another reform school in Jacksonville, Florida. Before the property could be sold, Kimmerle and her team won the right to excavate the grounds. She has until next August to search the ground relying on radar, dogs, old maps, and the testimony of former students. 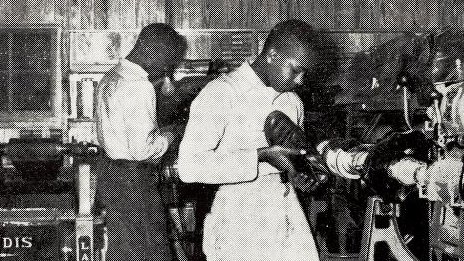 Thus far no bodies have been discovered outside the loose bounds of the Boot Hill burial ground. But Cooper, president of the White House Boys, says that the 55 bodies already found "are just the tip of the iceberg". He believes the excavation at Dozier may be one of the last chances to prove the allegations they have been making for years. When the BBC visited the site in February, crews were excavating the ground behind the White House but had found no remains. Still, says Kimmerle, it is too early to rule out foul play in regards to any of the 55 sets of remains recovered. She also notes that their investigation indicates that the children who died in the fire were locked in their rooms with no means of escape, while those who died in the flu epidemic were abandoned by the staff without food or medicine. 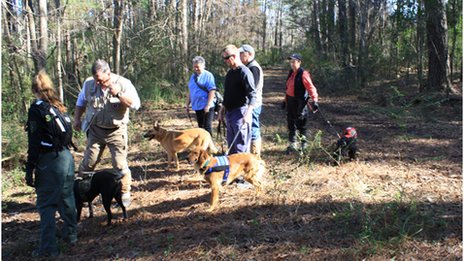 Canine recovery teams search the woods on the Dozier campus
No matter what else is found, the excavation and the continued attention brought to Dozier means that the story of what happened to Cooper and the other boys remains in the headlines and the story of life at the Dozier school continues to spread. "I want it out there what happened to us," says Cooper, who has spent years advocating for the White House Boys. It was largely thanks to his organisation, along with dedicated reporting from the St Petersburg Times, that the story remained in the public eye.
"Don't feel sorry for us," he says.
Your comment has been forwarded to the administrator for approval.×
Warning! Will constitute a criminal offense, illegal, threatening, offensive, insulting and swearing, derogatory, defamatory, vulgar, pornographic, indecent, personality rights, damaging or similar nature in the nature of all kinds of financial content, legal, criminal and administrative responsibility for the content of the sender member / members are belong.
Related News