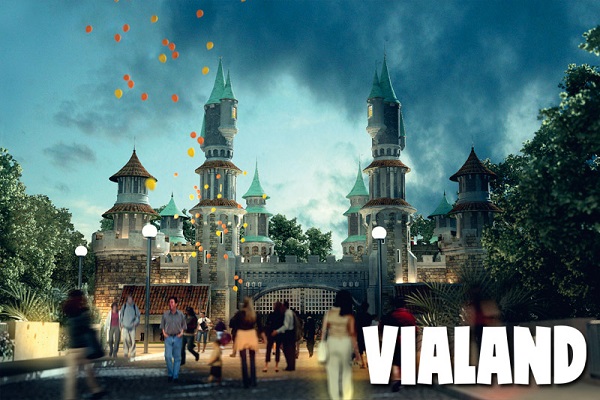 VIALAND General Manager Tolga Alişoğlu, stated that they made new investments within the theme park and said “We started 360 degrees retail by integtrating shopping center with entertainment center. Also, with VIALAND Palace Hotel that will open with 101 rooms this year, we will move our position one step forward. VIALAND had a busy tourist attraction of Middle East, Eastern Europe and The Balkans since the opening.”

VIALAND, opened at the end of May last year with an investment worth of $ 650 million and in partnership of Gursoy Group & Via Properties.

The new projects that will be very sensational both nationally and internationally, will take place in VIALAND this year. Resulting 110 km speed in 3 seconds and one of the world’s popular roller coaster Nefeskesen (Launch Coaster), that is one of the new units in VIALAND Theme Park, will be indispensable for adrenaline lovers.

‘Fatih’in Ruyası’ (Fatih Dark Ride), is another unit that will be opened in VIALAND in this season. In this unit where conquest of Istanbul by Fatih Sultan Mehmet is illustrated with the animatronic-humanoid sculptures, visitors will have the chance to see many conquest scenes like the ships carried from overland and the entrance of Fatih to Istanbul. The unit which is unique and unexcelled in Turkey has an investment value os 20 million USD.

The story of the magnificent submarine simulation of SpongeBob SquarePants who is very popular in our country and in the World will be in VIALAND Theme Park in the new season as well.

Moreover, children will find themselves while traveling in the midst of nature in 4D cinema with Dora The Explorer’s uninhibited exploration. This new unit will be in VIALAND in the new season as well with the worldwide other famous shows.

The speed train Maceraperest (Family Coaster) climbes a height of 22 meters, reaches 70 km after an exciting fall and completes its adventurous trails after passing through the cornerings at that speed. The train completes its one tour in 100 seconds on the rails of exceeding 580 meters.

In Crazy River (Rafting Ride) the visitors can quickly scroll through between two waterfalls and live safe rafting experience as a family.

Viking (Splash Coaster), is ranked as the 4th popular unit in the world. This unit offers an incredible excitement experience with its 45 degrees sled landing on the water acceleration.

Visitors experinece the force of 5G at the Adalet Kulesi (Drop Tower) in VIALAND while falling down from 50 meters.

Early sales campaign is held for the first time in VIALAND this year. The tickets of the campaign which has limited quota will be sold on vialand.com between February 25th - March 15th and will be valid  between April 1st - June 30th for the entrance of the Theme Park. Tickets will be sold at prices starting from 29 ₺ for weekdays and 35 ₺  for weekends. The season rates fort he same dates that is not included by the the campaign will be 55 ₺  for weekdays and 65 ₺  for the weekends