The secrets of the Sultan's Harem on show in London

Streets of Istanbul and the secrets of the Sultan’s Harem in a production called ‘One Day in Istanbul’. 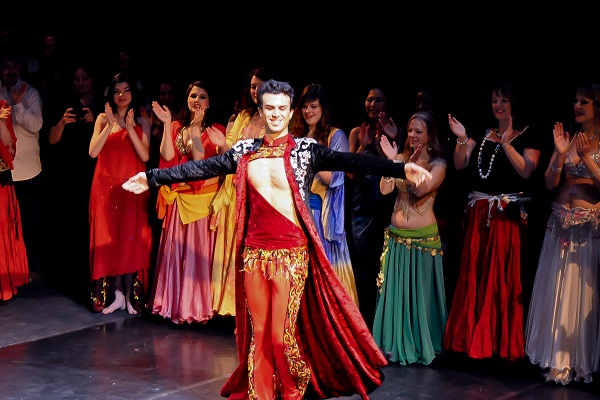 03 December 2012: A cast of 40 predominantly amateur dancers and musicians took to the stage at the Cockpit Theatre in central London last night to tell the tale of the bustling streets of Istanbul and the secrets of the Sultan’s Harem in a production called ‘One Day in Istanbul’. Created by internationally renowned Turkish Cypriot dancer and choreographer Ozgen, the community show aims to help empower women performers of all ages, shapes and ethnicities through the beauty of Ottoman-inspired music and dance.

The two hour spectacle contained four acts – a Romany wedding scene, the bustling streets of Istanbul, the Sultan’s Harem, and the Sultan’s secret, played out through Oriental dance. The show featured a diverse cast of Londoners. 29 were women aged between 20 and 50 years old, their ethnic origins spanning American, British, Chinese, Cypriot, Polish, Italian, and Russian. 25 were on stage for the very first time, demonstrating how Oriental dance can give body conscious women the confidence to perform this glamorous and sensuous dance in public. The sell-out London show was co-produced by Rosy Summerbell and Michelle Deniz Woodhouse from award-winning Dunya Bellydance, with music from master darbuka player Sallam Al-Sheikh and the London Drum Circle.

One Day in Istanbul made its world premiere in Madrid in June this year. It travels to Australia in 2013. Ozgen is a rising star in Oriental dance. He completed a month-long tour of the United States of America in September, performing 18 shows before jetting to Columbia for a major dance festival and an appearance on national Columbian TV. He is expected to feature in a TV documentary for the UK’s Channel 4 in the New Year.