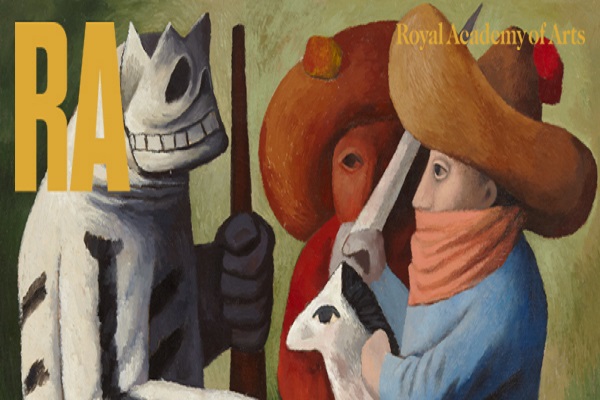 Works by all of these artists and more have been assembled in what The Observer calls a ‘terrific time-lapse sequence’, allowing you to see Mexico through the eyes of the artists it inspired.

Mexico: A Revolution in Art, 1910-1940
6 July—29 September 2013
In The Sackler Wing of Galleries, Burlington House
2009-2013 Season
In 1910, revolution brought years of instability to Mexico but, in its aftermath, the artistic community flourished under state sponsored programmes designed to promote the ideals of the new regime.
This exhibition brings together work by Mexican artists at the forefront of the artistic movement including Diego Rivera, Frida Kahlo and José Clemente Orozco. Also on display is work by international artists and intellectuals who were drawn to the country by its political aspirations and the opportunities afforded to artists. Among them were Marsden Hartley, Josef Albers, Edward Burra, Paul Strand, Henri Cartier-Bresson, André Breton and Robert Capa.
'Mexico: A Revolution in Art, 1910-1940' reveals a cultural renaissance that drew in some of the most seminal figures of the 20th century, all of whom were inspired by the same subject: Mexico.
Royal Academy of Arts
Piccadilly site:
Burlington House, Piccadilly
London W1J 0BD
Burlington Gardens site:
6 Burlington Gardens
London W1S 3ET
General enquiries
Telephone 020 7300 8000
Your comment has been forwarded to the administrator for approval.×
Warning! Will constitute a criminal offense, illegal, threatening, offensive, insulting and swearing, derogatory, defamatory, vulgar, pornographic, indecent, personality rights, damaging or similar nature in the nature of all kinds of financial content, legal, criminal and administrative responsibility for the content of the sender member / members are belong.
Related News