Mayor of London’s ‘My London Borough of Culture’ programme, with the support of Enfield Council

A drab, former World War Two civilian defence centre in Pymmes Park, Edmonton, has been transformed into a cultural landmark by local artists. 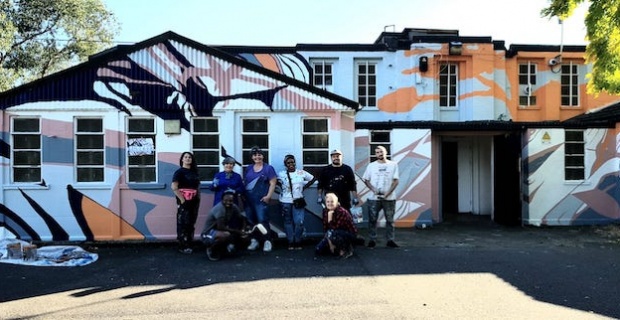 The entire exterior of the visitors’ centre has been painted in an innovative design to reflect both the urban nature of the surrounding area and the natural environment.Graduate of the Lewisham School of Muralism and local resident Liv Wright along with fellow artists Al Leys and Amy Dolan raised more than £2,435 via crowdfunding and were awarded an additional £4,915 from the Mayor of London’s ‘My London Borough of Culture’ programme, with the support of Enfield Council.

Liv Wright said: “The aim of this mural, on the Pymmes Park Visitor Centre, is to make something beautiful, reinventing the space as something representative of the park, and the people that use it.”

Enfield Council’s Cabinet Member for Environment, Cllr Rick Jewell, said: “The visitors’ centre at Pymmes Park has been given a new lease of life for the community and local residents. Liv, Al and Amy have done a fantastic job alongside volunteers and I hope the mural project prompts local people to take an interest in this beautiful park which is such an important natural resource for the people of Edmonton. 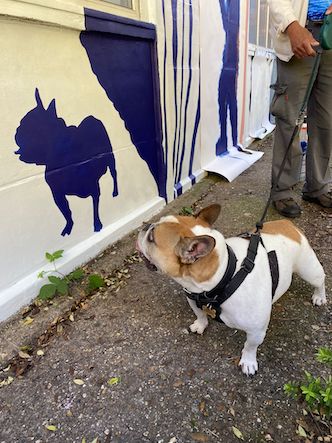 “Enfield Council is committed to improving access to green spaces and the amenities within them. In addition, we are bringing art to our outdoors areas, ensuring everyone can enjoy culture, all around the borough.”

The artists spent three months engaging with local primary schools, the Friends of Pymmes Park, the Pymmes Park Age UK walking group and residents to reflect on their experiences of the park and to help develop ideas that could be adapted into the design of the mural.

The abstract mural takes the form of a pattern often used on ships called ‘dazzle camouflage’ – a nod to the building’s use in World War Two. But hidden amongst the bold shapes are silhouettes of animals that can be found in the park, images of the volunteers who helped paint the building, as well as the silhouette of an inquisitive dog who visited daily during the two-week project. Brewers Enfield supported the community initiative with discounted and free of charge masonry paint for the project.

The Friends of Pymmes Park group is always looking for volunteers to help with projects within the park. If you would like to get involved, contact them via Facebook:  https://www.facebook.com/Friendsofpymmespark

Keywords:
Mayor Of LondonsMy London Borough Of CultureEnfield Council
Your comment has been forwarded to the administrator for approval.×
Warning! Will constitute a criminal offense, illegal, threatening, offensive, insulting and swearing, derogatory, defamatory, vulgar, pornographic, indecent, personality rights, damaging or similar nature in the nature of all kinds of financial content, legal, criminal and administrative responsibility for the content of the sender member / members are belong.
Related News