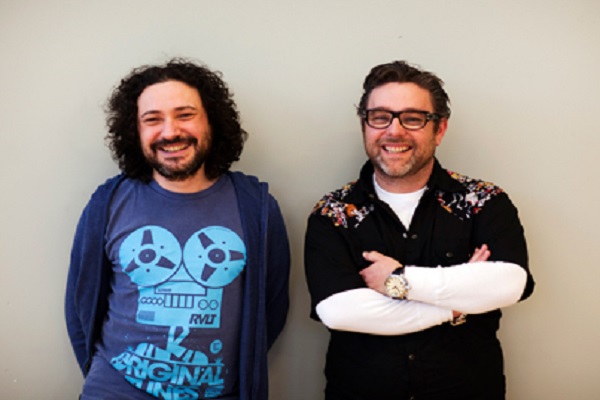 By Jeremy Dyson and Andy Nyman

If you don’t leave the theatre feeling shaken, stirred and thoroughly entertained then I can only applaud you for having nerves of steel.

GHOST STORIES mixes the very best of theatre with the intense buzz of a thrill-ride, restaged and reimagined by writers Jeremy Dyson (THE LEAGUE OF GENTLEMEN) and Andy Nyman  (SEVERENCE, DEADSET) along with director Sean Holmes.

Jeremy Dyson has won numerous awards as the co-writer of the hilariously bleak THE LEAGUE OF GENTLEMEN; including a Perrier Award, BAFTA Award for Best Comedy and the Golden Rose of Montreux. The stage show he co-penned, A LOCAL SHOW FOR LOCAL PEOPLE, was nominated for an Olivier Award in 2002.

Andy Nyman is and acclaimed actor Andy’s acting credits include Channel 4’s BAFTA nominated DEAD SET, the horror-comedy directed by Christopher Smith SEVERENCE and KICK ASS 2. He is the award-winning co-writer and co-creator of the TV productions DERREN BROWN – MIND CONTROL and TRICK OF THE MIND. He co-wrote and co-directed DERREN BROWN LIVE, AN EVENING OF WONDERS, ENIGMA and Derren's most recent live show – INFAMOUS. Andy also won the Best Entertainment Olivier Award in 2005 for SOMETHING WICKED THIS WAY COMES.

WARNING: PLEASE BE ADVISED THAT GHOST STORIES CONTAIN MOMENTS OF SEVERE SHOCK AND TENSION. THE SHOW IS UNSUITABLE FOR ANYONE UNDER THE AGE OF 15. WE STRONGLY ADVISE THAT THOSE OF A NERVOUS DISPOSITION TO THINK VERY SERIOUSLY BEFORE ATTENDING.

Tickets previously on sale until Saturday 24 May. Tickets until 17 August will go on sale 10am, Friday 14 March 2014