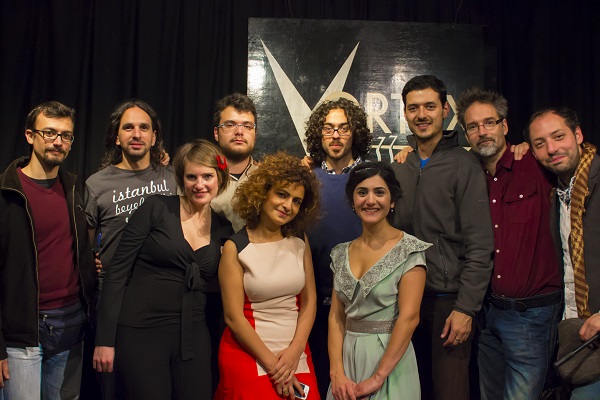 Following the recent release of her highly-praised album Mortissa, singer Cigdem Aslan gave 3 concerts on 3 nights in Dalston’s famous Vortex Jazz Club on 11, 12 and 13 October to celebrate the launch. On each night the venue was full to overflowing, and on each night Cigdem Aslan cast a spell over the audience with her fabulous voice for two and a half hours turning the Vortex into an old-style Café Aman with songs in Greek and Turkish from the 1920s and 30s. The audience. Who included Turks, Kurds and Greeks, as well as well-known BBC 6Music presenter Cerys Matthews, were sometimes moved to tears and sometimes sang along in Turkish or Greek. The songs in smyrniac or rebetiko style included popular Turkish songs such as Kanarini, Cakici, Hic Mi Beni Sevmedim, and Usakli Kiz. Some of the songs are the same in Turkish and Greek and Cigdem was joined by Greek vocalist Pavlos Melas sharing the same song in both languages. The concert was given a five-star review in the Evening Standard newspaper, which described Cigdem Aslan as  “A Kurdish Lioness” and a “nightingale” . Cigdem, who was born to a Kurdish family in Istanbul, also sang a song in Kurdish with Tahir Palali on kopuz. Actor Phillip Arditti read some beautiful stories connected to the music.

The band consisted of 10 top class musicians. Greek bandleader Nikos Baimpas led the band on kanun and Susi Evans from the band She’koyokh gave some exquisite solos on clarinet. Cahit Bayav, Meg Hamilton provided the violins in the orchestra. Special guest Michalis Cholevas, a Greek who teaches Turkish music in the University of Rotterdam, joined the group on yayli tanbur.  People commented that the concert felt like being in an old Turkish movie.

Cigdem Aslan’s album Mortissa (which means a free-spirited, independent woman in Greek) entered the top ten of the World Music Charts Europe as soon as it was released and was featured on National Public Radio USA as one of 5 Must-Hear International Albums. It was selected as a Top Of The World album by the prestigious Songlines magazine. The album will be released in Turkey in November by Sony Turkiye. Cigdem gave a live performance on BBC Radio two weeks ago. One member of the audience who lives in Amsterdam heard the performance on the BBC and travelled to London especially to hear the concert.

You can hear Cigdem perform again on Saturday 19 October at 5pm in Bloomsbury Square as part of the free Bloomsbury Festival and with She’koyokh band at the Vortex on 30 October. You can follow Cigdem on Facebook CigdemAslanOfficial or Twitter @CigdemAslanSong.