Young Scholars Series, Discussing the Experiences of Turkish Academics in the UK with Tugay Durak 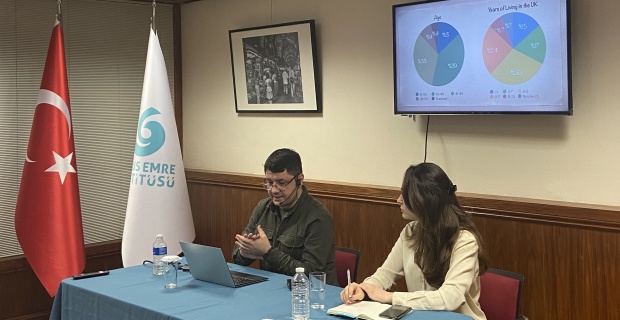 While the positive outcomes of an overseas experience for international academics has almost become a hackneyed platitude, there is another, darker side to the migrant academic’s experience.
Yunus Emre Institute – London held its 18th iteration of its Young Scholars seminar series on Tuesday 15th February 2022 hosting Tugay Durak, UCL Ph.D. candidate and postgraduate teaching assistant. Durak presented his findings after interviewing forty-six Turkish academics working in UK universities and challenging this common and rosy view of academic environments. Following the fully booked talk, the audience was able to ask the burning questions they had racked up following such a fascinating and norm-challenging talk in a Q&A session.

Tugay Durak is a PhD candidate and postgraduate teaching assistant at the Institute of Education, UCL's Faculty of Education and Society, and he focuses on the Turkish academic diaspora in the UK. Last year, he worked at a British Council project aiming to promote higher education partnerships between Turkey and the UK. In 2019, Durak completed his master’s degree at the same institution on international scholarships for academic mobility. Before embarking on postgraduate studies, Durak taught Mathematics in Istanbul for four years at the secondary level. He undertook his bachelor’s degree from Boğaziçi University in Istanbul, Turkey.

Durak began the talk with outlining his study, his methodology and the challenges he faced in his research. Approaching the matter critically, Durak drew attention to the intrinsic meaning of mobility associated with the loss of stability, de-territorialization, and loss of fixed national identification. He paired these themes with widespread job instability as well as overt and covert forms of racism, xenophobia, and exclusion against mostly ethnic-minority migrant academics. He pressed that there are several interacting factors, such as gender, ethnicity, and religiosity, that influence an academic's experiences overseas and that the experiences of Turkish academic staff working in the UK and these intersecting characteristics affected this experience.
Presenting his findings, he drew upon the interviews he carried out with UK-based Turkish academics, quoting, explaining, and analysing the inter-related themes they discussed. From those who felt completely happy in their experiences, to those who felt like an outcast looking in, from those who acknowledged their privilege to those who felt the need to change to fit in, Durak weaved these separate and interlinked experiences into a complex narrative on the plight of the migrant academic.
The talk ended with a Q&A session from the engaged audience who were able to enjoy the traditional Turkish refreshments served.
This talk was part of the Young Scholar Seminar Series, also known as Genç Akademisyenler, an international and interdisciplinary platform for knowledge exchange established in 2017. Each seminar features an outstanding postgraduate student who is studying a global or Turkey-related topic presenting their research to the wider public. The long-running series, is an opportunity for all those interested, expert or those simply curious, to engage and interact with academic leaders of tomorrow.

The upcoming weeks will see further scholars take the stage and discuss their research areas. These scholars include:

Recordings of the talk can be viewed on Yunus Emre Institute in London’s YouTube channel, Yeelondra.
For updates on future Young Scholars please visit the Institute’s website, https://yeelondon.org.uk/, or follow their social medias, @yeelondra.

Keywords:
Young Scholars SeriesTurkish Academics In The UKTugay DurakLondon Turkish AcademicsEngland Turkish AcademicsYunus Emre Institute LondonUCL PhD CandidatePassing The Whiteness Threshold
Your comment has been forwarded to the administrator for approval.×
Warning! Will constitute a criminal offense, illegal, threatening, offensive, insulting and swearing, derogatory, defamatory, vulgar, pornographic, indecent, personality rights, damaging or similar nature in the nature of all kinds of financial content, legal, criminal and administrative responsibility for the content of the sender member / members are belong.
Related News