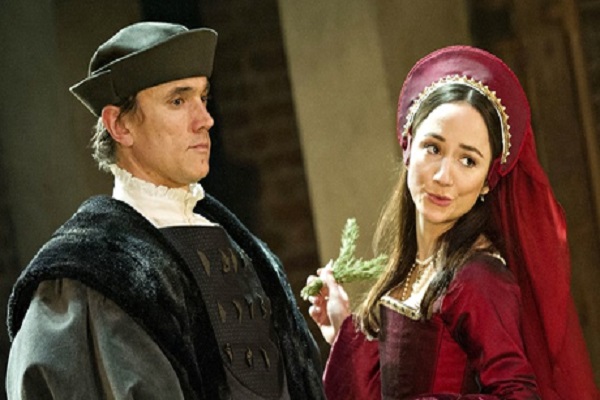 the RSC productions of

Wolf Hall and Bring Up the Bodies

A new dramatisation of Hilary Mantel’s novels by Mike Poulton

• Many of the RSC company will transfer to the West End including Ben Miles as Cromwell, Nathaniel Parker as Henry VIII, Lydia Leonard as Anne Boleyn, Paul Jesson as Cardinal Wolsey and Lucy Briers as Katherine of Aragon.

• Public Booking opens at 10am on Monday 10 March with RSC Members Priority Booking opening today at 10am.

Hilary Mantel’s enormously popular books have been adapted for the first time for the stage in two parts by Mike Poulton. The adaptations were commissioned by Playful Productions who worked in collaboration with the RSC to bring them to the stage. Directed by Jeremy Herrin, the productions have been met with universal acclaim with tickets quickly selling out at the Swan Theatre in Stratford–upon-Avon. These two plays tell the compelling story of the political rise to power of Thomas Cromwell from blacksmith’s boy to Henry VIII’s right hand man, and have been playing in repertoire since December.

Of the transfer, Hilary Mantel said:

“I am, I think, currently the luckiest author in the world. When my novel Wolf Hall was published in 2009, it was awarded a Man Booker prize and brought me a legion of keen readers worldwide. Its sequel, Bring Up the Bodies, won a second Man Booker and the Costa prize. Could life get better?

It could. Brilliantly adapted for the stage by Mike Poulton, my Tudor tales are enjoying a spectacular run in Stratford-upon-Avon. Each night, at the Swan Theatre, we have the privilege of setting our funny, fast, harrowing plays before audiences who are provoked, exhilarated and moved. Jeremy Herrin directs a clever, committed cast, headed by Ben Miles as the sardonic and constantly surprising Thomas Cromwell. In their glowing costumes, against a stark background, lapped by flames and falling snow, our company recreates the court of Henry VIII, its brief love affairs and brutal power games, its dances and masques, weddings and executions.

To walk into a theatre where every seat is taken is a special experience. Now we have the chance to bring the plays to a wider audience. We are thrilled that our London base is to be the Aldwych, once the home of the RSC, a theatre that will provide a showcase for this unique project. We hope to delight our London audiences this spring as we have delighted our Stratford audiences through the winter. Meanwhile, in the pages of my third book, steadily richer and more ruthless, more ingenious and more haunted, Thomas Cromwell remains a work in progress…”

“Hilary and I have been at work on Wolf Hall and Bring Up the Bodies for over three years and we’re still at it. It has been an extremely happy and close collaboration.  We’re constantly asked if there have been difficulties – tensions – in our working relationship and we’ve become almost apologetic in having to confess that there have been none. Absolutely none. Tickets for the Stratford run sold like wildfire – which was humbling. The London transfer is a relief to us all. And for me the Aldwych is the perfect theatre because of all its connections with the RSC – it feels like coming home.”

“I'm delighted to be working with this great ensemble to deliver these entertaining adaptations of Hilary's phenomenal novels to a new audience in a new space. The Aldwych is a theatre that I've always wanted to work in so it's a privilege to be able to do so with such exhilarating material. I can't wait to show London how thrilling and current the story of Thomas Cromwell is.”

“From first reading Hilary’s incredible books we knew they would make gripping theatrical events, and that great creative skill and imagination would be required to make that possible.  It is with huge pleasure we have seen them crafted by Mike Poulton and Hilary herself and directed by Jeremy Herrin to become the current ‘must see’ shows of our winter season.

One of the RSC’s most important roles is to nurture epic, complex and ambitious work and to support it with superlative acting, attention to detail and the excellent stagecraft you can see in these productions. We are very proud of them.

Following the success of Matilda The Musical, which started out in our Courtyard Theatre and is now thrilling audiences in the West End and on Broadway, and our recent sell-out residency with Richard II at the Barbican, we are delighted that we can give audiences in London the opportunity to see work made in Stratford-upon-Avon for our Swan Theatre.

We are so pleased that Wolf Hall and Bring Up the Bodies have found an ideal London home at the Aldwych Theatre.   Co-produced with the expertise of Playful Productions, we hope both productions will have a very happy life in the West End.”

“After four years of developing Hilary’s magnificent books into plays, everyone at Playful Productions is delighted to have finally found a jewel of a London theatre to present the RSC’s wonderful productions in.”

Jeremy Herrin became Artistic Director of Headlong in September 2013. Previous to this he was Deputy Artistic Director of the Royal Court from 2009 until 2012, where his credits include Tusk Tusk, for which he was nominated for an Evening Standard Best Director Award, The Priory, which won an Olivier Award for Best Comedy, That Face, which transferred to the West End, No Quarter, Kin, Haunted Child, Off The Endz, The Heretic and The Vertical Hour. His credits at Chichester Festival Theatre include Uncle Vanya and Another Country, which transfers to the Trafalgar Studios later this month.  Theatre credits at the National Theatre include This House, for which he was nominated for an Olivier Award for Best Director and Statement of Regret.  Other credits include South Downs, Absent Friends and Death and the Maiden in the West End, Family Reunion at the Donmar Warehouse, The Tempest and Much Ado About Nothing at The Globe. In summer 2014 he will direct The Nether, a co-production between Headlong and the Royal Court. Jeremy was Associate Director for the Live Theatre, Newcastle from 2000 until 2008.

Mike Poulton began writing for theatre in 1995.  His previous adaptations for the RSC include Morte d’Arthur, The Canterbury Tales Part 1 & 2 and Saint Erkenwald.  His adaptation of A Tale of Two Cities has recently opened at the Royal and Derngate.  Other recent productions include Fortune’s Fool at the Old Vic, Uncle Vanya and Judgement Day at The Print Room, Anjin: The Shogun and the English Samurai at Sadler’s Wells (RSC/ Horipro), Luise Miller at the Donmar Warehouse and The Bacchae at the Royal Exchange. Other productions include Uncle Vanya, The Father, Fortune's Fool, Wallenstein, The Cherry Orchard and The Syndicate at Chichester Festival Theatre, Mary Stuart and The Cherry Orchard for Clwyd Theatr Cymru, The York Mystery Plays at York Minister, The Lady from the Sea and Three Sisters at Birmingham Rep, The Seagull, The Dance of Death and Ion at the Mercury Theatre in Colchester, Ghosts at Plymouth Theatre Royal, Don Carlos at Sheffield Crucible and in the West End and Uncle Vanya on Broadway.   His production of Fortune's Fool on Broadway received a Tony nomination for Best Play and went on to win seven major awards.