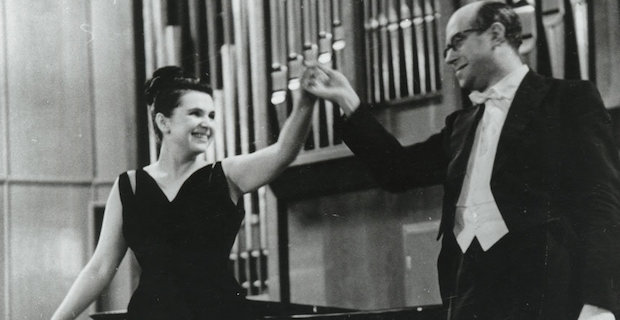 One was the world’s greatest cellist, and conductor, the other, the electrifying principal soprano of Moscow’s Bolshoi Theatre. Mstislav Rostropovich and Galina Vishnevskaya, the world renowned golden couple of classical music, were exceptional in their talents and vehement in their belief of artistic freedom. Unwillingly exiled from their beloved Soviet homeland, the couple’s inspiring story and continued legacy illustrates one of the most important triumphs of talent and moral conviction of our time.

On 28th November, Sotheby’s London will offer for sale the private collection of Rostropovich and Vishnevskaya. The dedicated sale will feature over 300 lots, including furniture, personal jewellery, Russian works of art, books, and even musical instruments played by the maestro, and by some of the most prevalent contemporary composers and musicians of the era - including Henry Dutilleux, Witold Lutoslawski, Alfred Schnittke, Arthur Rubinstein and numerous others. Offered with an estimate in excess of £3.5 million, the auction will present an unprecedented glimpse into the personal lives and loves of the two esteemed musicians.

Elena and Olga Rostropovich, the daughters of Mstislav Rostropovich and Galina Vishnevskaya, said: ‘Our parents were avid art collectors. They were passionate about all things Russian and surrounded themselves with works of art that reminded them of their own history as they travelled around the world. The sale includes many items that were very personal to them, which they lived with and which we have very fond memories of growing up around. While we are holding on to the things that mean the most to us, it gives us huge pleasure, as it would have done them, to give other people the opportunity to enjoy these objects that my mother and father cherished so closely.’

Jo Vickery, Sotheby’s International Director of Russian Art and Head of the Sale, commented: ‘We are thrilled to be instructed by Olga and Elena Rostropovich to sell works from their parents’ personal collection. We have a long standing relationship with the family having sold their legendary collection of Russian Art in 2007 which is now housed in Konstantinov Palace in Russia. Mstislav Rostropovich and Galina Vishnevskaya both loved taking part in auctions and were frequent visitors to Sotheby’s in the 1990s and we are delighted to work with the family once again. They were two of the greatest musical personalities of the 20th century who represented the spirit of their times and this collection brings to London not only a flavour of pre-Revolutionary Russia but also some of their most intimate possessions.’

Born in St Petersburg (then Leningrad) in 1926, Vishnevskaya made her operatic her debut in 1944 as the soubrette star in Leningrad’s operatta theatre. Fuelled by her passion for opera, she started private voice study and within a few years achieved the remarkable feat of becoming one of the principal sopranos of the renowned Bolshoi Theatre in Moscow. Awarded People’s Artist of the USSR’ in 1966, her operatic career, which spanned nearly 40 years, saw the eminent soprano perform at the world’s greatest opera houses, including La Scala, the Royal Opera House and the Metropolitan Opera.

Taught to play the piano at the age of four by his mother and the cello at the age of eight by his father, Rostropovich’s musical career had a more conventional start. A child prodigy, he made his debut as a soloist with orchestra at the age of 13 and in 1945 won the prestigious All-Union Soviet national competition for young musicians. Winning further prizes at international competitions confirmed Rostropovich’s destiny as a cellist and he became the youngest of a generation of great Soviet artists whose reputations preceded them in the West.

In May 1955, the two met at the Prague Spring Festival, where they had both been sent to represent Soviet music. A whirlwind romance ensued and bound by their shared devotion to music, they were married within four days. Throughout their careers, the couple often performed together, perhaps most memorably for a recording of Dmitri Shostakovich’s opera, Lady Macbeth of Mtsensk.

A passionate advocate of human rights, Rostropovich became famous throughout the Western world for his intense opposition to censorship in the arts. Openly condemning the suppression of artistic freedom, the musician came into conflict with the Soviet authorities, eventually leading to his and his family’s emigration and what would become a 16 year exile from their homeland. Stripped of their Soviet citizenship in 1978 they lived between their homes in London and Paris, only returning to Russia after the collapse of Communism. The family’s Russian citizenship was reinstated in 1990, with President Vladimir Putin awarding Rostropovich the Order of Service to the Fatherland shortly before his death in 2007.

In 2007, Sotheby’s planned an auction of Rostropovich and Vishnevskaya’s collection of Russian art. The sale was subsequently cancelled due to an arrangement of a private sale.

Keywords:
SothebysRostropovich And Vishnevskaya
Your comment has been forwarded to the administrator for approval.×
Warning! Will constitute a criminal offense, illegal, threatening, offensive, insulting and swearing, derogatory, defamatory, vulgar, pornographic, indecent, personality rights, damaging or similar nature in the nature of all kinds of financial content, legal, criminal and administrative responsibility for the content of the sender member / members are belong.
Related News