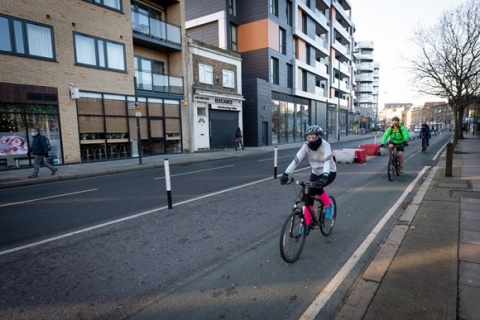 Cycleway 4 is the first major protected cycle route in southeast London, currently running as two sections between Tower Bridge Road and Rotherhithe, and Greenwich and Angerstein Roundabout
TfL is asking people for their initial feedback on a series of trial changes which will extend the route to London Bridge, with construction planned to start in early March. Changes will create further safe cycle routes to London Bridge station, one of the capital’s busiest. Construction work has also started on trial measures to extend the route between Angerstein Roundabout and Charlton
Transport for London (TfL) has set out plans to make a series of trial changes to Tooley Street and Duke Street Hill in central London, which will extend the new Cycleway 4 route to enable safer essential journeys between London Bridge, Rotherhithe and beyond.

The changes are a vital part of TfL’s emergency response to the coronavirus pandemic and TfL is asking people for their initial feedback on the plans ahead of construction work starting in early March. This follows the recent start of construction work on a further trial extension to the route in southeast London, between Angerstein Roundabout and Charlton.

Construction work on Cycleway 4 started in July 2019 and the first section of the route, completed in September 2020, is already connecting neighbourhoods in southeast London to central London via a fully protected cycle route between Tower Bridge Road and Rotherhithe. TfL is working to build trial schemes which enable more people to walk and cycle and help to maintain space on public transport for those who need it.

Trial changes planned for Tooley Street and Duke Street Hill as part of this emergency response include:

Sections of light cycle segregation with wands in both directions, along Tooley Street and Duke Street Hill, as well as extended advanced stop lines for people cycling
The eastbound arm of Tooley Street will be closed near the London Bridge Hospital and will become a new pedestrian space. It will mean the large numbers of people walking who exit from London Bridge station and cross Duke Street Hill will have more room and fewer roads to cross when travelling east
Some changes for general traffic including a new left turn ban into Queen Elizabeth Street (except for local buses, taxis and cycles) which will reduce the risk of road danger and protect people cycling from the potential of being injured by vehicles turning left

Keywords:
New ExtensionsCycleway 4 RouteCycle JourneysCycle Journeys During Pandemic
Your comment has been forwarded to the administrator for approval.×
Warning! Will constitute a criminal offense, illegal, threatening, offensive, insulting and swearing, derogatory, defamatory, vulgar, pornographic, indecent, personality rights, damaging or similar nature in the nature of all kinds of financial content, legal, criminal and administrative responsibility for the content of the sender member / members are belong.
Related News