DOLLAR 16,86
EURO 17,60
GOLD 980,35
BIST 2.405,98
Covid infections are rising again across the UK, the latest figures from...
Turkish and British business people gathered at the TBCCI Networking Event
22 point plan to tackle aviation disruption ahead of summer season
North Middlesex University Hospital staff ready for cycling trial
Number of people killed on London’s roads in 2021 fell to the lowest...
Enfield Summer Uni 2022 is back bigger and better
Turkish Republic of Northern Cyprus announced new measures for Covid 19...
TfL will begin fining motor vehicles caught driving in mandatory cycle...
Trains do not run across England over pay, planned job cuts as biggest...
A national scrappage scheme must be funded by Government 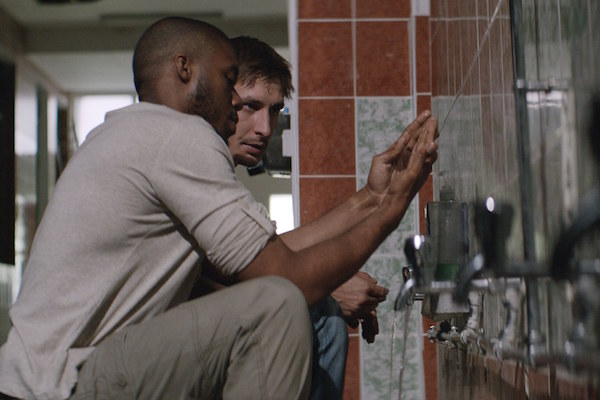 Bucking the trend about negative Muslim stories in the press, actor Martin Askew will talk about his salvation from a life of crime through Islam at a special screening event at the Rio Cinema, Dalston, on Saturday 6 June.Partly filmed at Shacklewell Lane Mosque, Dalston – the UK's first Turkish owned mosque, Snow in Paradise was released earlier this year after its world premiere at Cannes in May 2014. The critically acclaimed feature film was inspired by the life of Martin Askew – a British gangster turned Sufi Muslim. But does Britain want to know about the positive impact of Islam?

The film’s director Andrew Hulme said: “When I met writer Martin Askew I found someone with a story so incredible I was compelled to try and tell it in cinematic form. Here was someone born into East End crime, whose uncle was ‘The Guvnor’ Lennie MacLean, yet had converted to Islam. Here was someone with a dark past who had managed to control his anger and aggression through religion, someone who had understood he needed to correct himself if he were to escape and survive.”

Yet the film struggled to get financial backing and industry support in Britain, perhaps a reflection of the inherent prejudices against positive portrayals of Islam.

As Hulme tellingly states: “If [lead character] Dave went off for jihad at the end, it would make people happy and confirm their preconceptions.”

Martin Askew and Andrew Hulme will be attending a special screening and topical discussion at the Rio Cinema in Dalston, East London, on Saturday 6 June 2015. The Question & Answer session will be chaired by inter-faith champion & Tell Mama head Fiyaz Mughal OBE.

The 18-certificate film screening starts at 2.15pm and will be followed immediately after by the Q&A. Tickets are priced £6 / £3 concs (students/elderly/unwaged) and are available from the Rio box office (www.riocinema.org.uk, 020 7241 9410). Dalston is well-served by public transport: the nearest train stations are Dalston Kingsland and Dalston Junction (both part of the London Overground network).

The event is being organised by T-VINE Magazine – the UK’s first & only English consumer publication for British Turks – together with Faith Matters, and is sponsored by Aytaç Foods UK and the multi-award-winning Best Turkish Kebab in Stoke Newington.

Inspired by the incredible-but-true experiences of its co-writer/star, Hoxton boy Martin Askew, Andrew Hulme's impressive feature debut is an East End gangster film that takes a turn for the unexpected. Set in a changing world that is more gentrification and multiculturalism than geezers and tarts, it's a tale of guilt, fear and redemption powerfully and atmospherically told.

Martin grew up in Hoxton, one of London's most crime-riddled hot spots. He was born into one of the biggest families in the area, the Mcleans. His uncle, Johnny Wall, was an East End legend and a boxing champion, and his cousin Lenny “The Guvnor” Mclean was the most famous bare knuckle street fighter in the country, who was given the title of Briton's Toughest Man and later starred in the film Lock Stock and Two Smoking Barrels. Those two men were his heroes.

He excelled as a young sportsman: a good amateur boxer, footballer and all-round athlete. However, his sport's career was cut short suddenly one day as he was walking home with friends when two men tried to stab him. During the ensuing street fight one of his friends got murdered in front of him. On the way to the funeral, four of Martin’s best friends were then killed in a horrific car crash. After witnessing these events, Martin was not the same young man anymore; these experiences and his fear of being the next victim catapulted him into a street gang.

Street life, hard drink, drugs and violence became the norm, although it couldn't ease the pain and the guilt he was hiding. The vicious circle continued, until what Martin describes as the ‘best night of my life’: the night six bouncers gave him the worst beating ever. Finally humbled, he lay in the gutter smashed to pieces and fighting for his life.... That’s when he made his first prayer.

Hospitalized and with time to convalesce, he knew he had to change to survive. Martin stumbled on the Holy Quran. “I read it with an open heart and it touched me as deep as it answered all my questions about life". As a Sufi Muslim, Martin has fully embraced the true teachings of Islam and submits himself to peace. He does not affiliate himself with any forms of criminality or radicalisation.

Andrew is one of the UK's top film editors having worked on films such as Control, The American, Lucky Number Slevin, Gangster No1, The Imposter and Appropriate Adult as well as receiving a personal BAFTA nomination for editing for Red Riding 1974. He also writes and produces music, sound designs and has directed 2nd Unit. Snow in Paradise is his debut feature film.

Fiyaz has over 15 years experience in the community and voluntary sector in positions that have included social policy lobbying, project and general management, and conflict resolution work. A former councillor for Oxford, and later Haringey, Fiyaz’s work in recent years has focussed on reducing extremism and developing platforms for discourse and interaction between the UK’s diverse communities, forming Faith Matters in 2005.

He was appointed by the then Secretary of State for the Department for Communities and Local Government (the Rt Hon Hazel Blears MP) to be a member of the Local Delivery Advisory Group on Preventing Violent Extremism. Between 2009 and 2010, he also served as an Advisor to the Leader of the Liberal Democrats, Nick Clegg MP, on interfaith and preventing radicalisation and extremism. In 2012 he launched Tell MAMA (measuring anti-Muslim activity in the UK), an initiative supported by the British government.

In June 2009, Fiyaz was honoured by Her Majesty the Queen and was bestowed with the Honour of the Order of the British Empire.