The British kebab industry is constantly growing and contributes more than £2.2 billion to Britain’s economy every year. 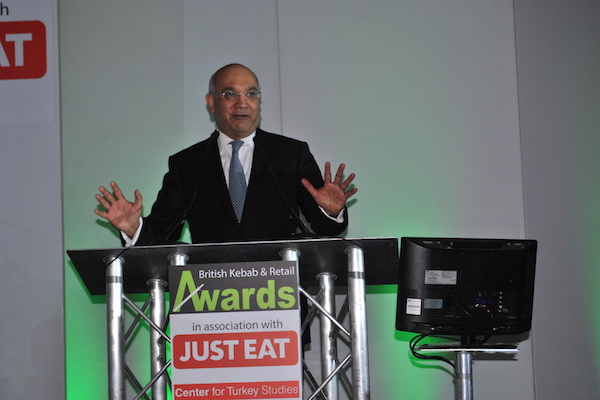 The British Kebab Awards are the first and only of their kind, the annual event celebrates the contribution of the UK’s kebab businesses to the British economy and the achievements of the hard-working people of the UK’s almost 50 year old industry. Details of the event are as follows:

The British kebab industry is constantly growing and contributes more than £2.2 billion to Britain’s economy every year. The British Kebab Awards aim to celebrate the best of the industry and improve the public image of the kebab. The awards are sponsored by the UK’s largest takeaway website JUST EAT.

Previous Awards ceremonies have been attended by MPs, Lords, journalists and celebrities. Over 1200 guests including more than 300 MPs, Lords, Baronesses and Councillors, and 800 businesses and community representatives attended the Fourth British Kebab Awards ceremony. They were even attended by Labour Party leader Jeremy Corbyn, and received a segment on the BBC's "The One Show". The Kebab industry has become a huge contributor to Britain's economic and cultural landscape, and the success of the British Kebab Awards shows just how important the Kebab has become. We hope you will join us to celebrate this momentous occasion.

For additional information, you might like to consult our booklets from 2016 and 2015 by clicking here and here.

The 5th British Kebab Awards is preparing for a grand ceremony with strong support from the growing British Kebab industry. Expecting senior politicians and business people, the ceremony will host over 1000 people in the Westminster Park Plaza Ballroom. We will be honoured to have you with us on this special evening.

The judging panel of the British Kebab Awards includes industry experts and politicians. Nominations are taken from the public, local politicians and kebab businesses. More information on the jury, nominations, past events and interviews can be found on the britishkebabawards.co.uk website.

We would be honoured to have you with us at the 5th British Kebab Awards. Please do let me know at your earliest convenience whether you can attend the reception and/or the three-course awards dinner.

With nominations now open, this is your chance to have your say on which restaurant you think deserves a prestigious British Kebab Award. Does your local kebab restaurant have what it takes? Maybe your favourite restaurant provides a great fine dining experience, maybe their food is just to die for? Perhaps you think they give you the best value for money? Let us know! Have your say!