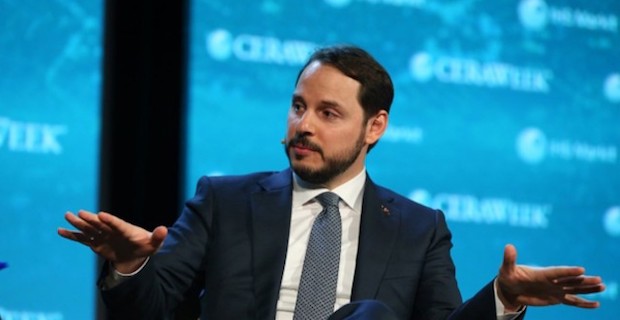 Announcing the program, Treasury and Finance Minister Berat Albayrak said the country will activate a comprehensive set of economic policies.

"A Public Finance Transformation and Change Office has been established under the new economic program," Albayrak said.

"We will use all necessary policies and measures to overcome economic challenges.

"We expect a stabilization process for next year and 2020, so the new economic program aims for 2.3 percent economic growth in 2019," he added.

Albayrak said that this year’s economic growth target is 3.8 percent.

"The country will set sustainable and healthy economic growth through strategies and measures as announced in the new program.

"Our major intention is to support a stabilization process with disciplined public finance," he said.

According to the new economic Medium-Term Program (MTP), Turkey is targeting a 1.9-percent budget-deficit-to-gross-domestic-product (GDP) ratio this year, and 1.7 percent in 2021.

“In order to maintain our strong stance in public finance, we have begun to take some measures to ensure the correct use of resources in the public sector starting today," said Albayrak.

On transformation, Albayrak said that the main target is to focus on value-added areas which will boost the country's export volume and long-term production capacity.

"You will see the most concrete example of this in investment projects that we will support,” he added.

In creating employment, Albayrak said Turkey will generate 2 million new jobs by the end of the MTP period, with an unemployment rate target of 10.8 percent in 2021.

As of June, Turkey's unemployment rate was 10.2 percent -- some 3.3 million unemployed people -- while the number of people employed was 29.3 million.

Keywords:
Berat AlbayrakTurkeys New Economic Program
Your comment has been forwarded to the administrator for approval.×
Warning! Will constitute a criminal offense, illegal, threatening, offensive, insulting and swearing, derogatory, defamatory, vulgar, pornographic, indecent, personality rights, damaging or similar nature in the nature of all kinds of financial content, legal, criminal and administrative responsibility for the content of the sender member / members are belong.
Related News