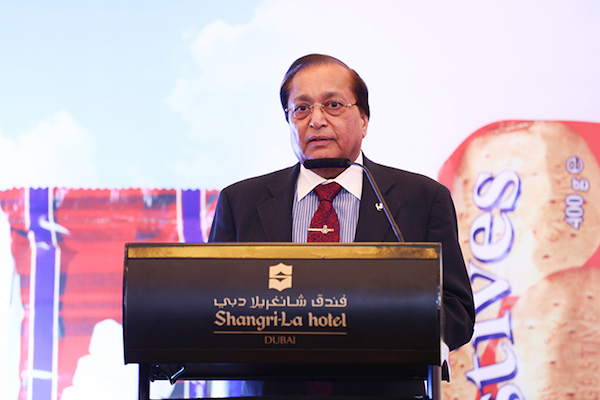 It was, as always, a glittering affair with esteemed guests from the Middle East and South Asian region but with many also flying in from as far away as Canada, Cameroon and South Africa; with the array of guests resembling a gathering of the United Nations. Sun Mark is the only British company to have been awarded the Queens Award for Enterprise in International Trade for an unprecedented 5 consecutive years and exports to over 130 countries. Sun Mark’s achievements are seen as the gold standard and recognised as an Ambassador for UK Business. The Chief Guest from the British Government was the Rt. Hon. Richard Harrington MP, Under-Secretary of State for the Department for Business, Energy and Industrial Strategy. The Guest of Honour was Her Majesty’s Consul General to the U.A.E, Mr Paul Fox.

The evening was also attended by the cricket legend Mr Muttiah Muralitharan and the Honourable Mr Maalaine Salama, Head of Media Relations at Dubai Municipality. H.E Mirza Al Sayegh , Representative of HH Sheikh Hamdan bin Rashid Al Maktoum , Deputy Ruler of Dubai and Finance Minister of the UAE, could not attend the gala dinner, but conveyed his best wishes to Sun Mark for the event.

The evening began with Mr. Harmeet (Sunny) Ahuja, Director and CEO of Sun Mark, welcoming the guests. He informed them that 2017 had been a monumental year in the history of the company as it was the year of the 70th birthday of the company’s founder and chairman, Dr Rami Ranger CBE. He then proceeded to show a special video outlining Dr Ranger’s story and milestones through his life.

Dr. Ranger, in his speech, paid tribute to all those who worked closely with him and how the success of Sun Mark was a result of a combination of customers, and suppliers and other service providers coming together to help each other to progress. He thanked his team from Sun Mark for all of their efforts. He reminded his guests that with the right values anyone can succeed and told his own story and how it can inspire anyone to do the best they can.

The guests were then addressed by Her Majesty’s Consul General to the UAE, Mr Paul Fox, who spoke of the importance of trade and reiterated its importance in forging improved relations across the world. He also acknowledged Dr. Ranger’s philanthropic efforts and achievements. He spoke of the British food industry being a major employer and is the largest sector of UK manufacturing and an unsung hero of the British economy. He encouraged British companies to work in the UAE and to use it as a base to grow their business further. The Chief Guest, Mr Richard Harrington MP, spoke of Dr Ranger and his team’s achievements and lauded him for acknowledging the efforts of all those who worked for him and also of his wife’s great contribution to the company’s success.

Mr Sunny Kulathakal, Global President of GOPIO (Global Organisation of People of Indian Origin) addressed the guests and acknowledged the contribution of Dr Ranger in social and cultural arenas and encouraged others to join them in their efforts.

Sun Mark then recognised some of its regional partners and distributors in the region who had made a significant contribution to the growth and development of business. They were Sir Prince Oji Okisisi of company Prince Oji in Nigeria. Mr Izzat Ullah Khan of Naveed Trading, Pakistan, Mr Vijay Aswani of Al Vihag Enterprises, Gambia and there was a special award for outstanding lifetime achievement for Sheikh Khalid Mahmood of Bismillah Stores of Pakistan who collected his award with his son, Sheikh Omer Khalid.

The Vote of Thanks was given by Mr. Harmeet Ahuja, who thanked Dr. Rami Ranger and Sun Mark UK and UAE team for making the evening possible and for bringing together such a myriad of people from all over the world.

The formal part of the evening was then concluded and dinner was served.