Some mortgage deals have been withdrawn by banks and building societies

The Bank of England said on Monday it would "not hesitate" to hike interest rates after the pound hit record lows. 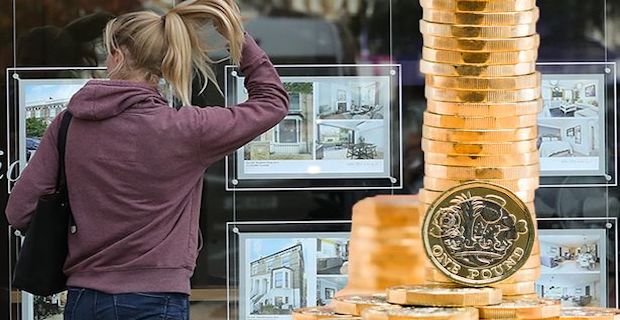 Some mortgage deals have been withdrawn by banks and building societies after a fall in the pound fuelled forecasts of a sharp rise in interest rates.Virgin Money and Skipton Building Society halted mortgage offers for new customers while Bank of Ireland said it had withdrawn all mortgages.Halifax said it would stop mortgages with product fees.The Bank of England said on Monday it would "not hesitate" to hike interest rates after the pound hit record lows.The pound plunged against the dollar on Monday after comments at the weekend from Chancellor Kwasi Kwarteng pledging more tax cuts, on top of Friday's mini-budget when he announced the biggest tax cuts for 50 years. Overnight, the pound stabilised at $1.08 after hitting a record low of $1.03 on Monday.The mini-budget plans will require a large increase in government borrowing and concerns among investors about the country's ability to meet that debt led to the value of the pound being pushed down while the cost of UK government borrowing also soared.

Former US Treasury Secretary Larry Summers tweeted: "I was very pessimistic about the consequences of utterly irresponsible UK policy on Friday. But, I did not expect markets to get so bad so fast." 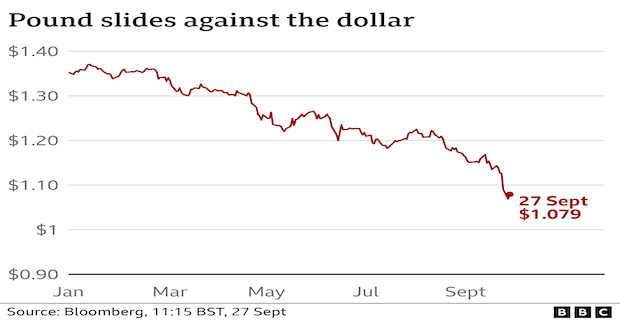 A weaker pound also makes imports and goods priced in dollars, such as oil, much more costly and risks fuelling price rises at a time when UK inflation is at its highest for 40 years.
The Bank of England said it would make a full assessment as to whether it should change interest rates at its next meeting on 3 November, following speculation it might have intervened earlier.

Bank will not hesitate to raise interest rates

Why has the pound tumbled?

Following Monday's volatility, financial markets updated predictions and said interest rates could now more than double by next spring to 5.8%, from their current level of 2.25%, to curb inflation - the rate at which prices for consumers rise.Experts said a rise in the cost of long-term borrowing meant the current cost to mortgage lenders of offering new deals was now more expensive. There are also concerns that would-be borrowers will rush to secure mortgages at favourable rates before interest rates rise and if they do jump, homeowners will not be able to afford higher repayments.

Some 8.3 million people have mortgages in the UK, according to UK Finance, the trade association.

The number of residential mortgages on offer by lenders fell to 3,596 on Tuesday, according to financial information firm Moneyfacts, compared with 3,961 deals on Friday when the mini-budget was announced. It is also a sharp fall from the number available in December last year when the Bank of England started raising interest rates.

Julie-Ann Haines, chief executive at Principality Building Society, said: "As a lender what we need to do is one of two things. Firstly to make sure that customer mortgages are affordable. We have to do that under regulation and we therefore need to stress-test and make sure that if the Bank of England base rates go up that consumers can still afford their mortgage.
"And of course the second thing is banks and building societies have to be able to make a margin and so they have to price that increased financial market view of the interest rates into their products, and that's why you're seeing [mortgage] rates start to really go up quite fast over the past two to three months."

The Bank has already lifted interest rates seven times in a row since December to the highest rate in 14 years.

In August, the Bank scrapped a mortgage affordability rule which required banks and building societies to stress test whether homeowners could cope with a 3% rise in interest rates.
Samuel Tombs, chief UK economist at Pantheon Macroeconomics, said if interest rates rise as predicted, the average household refinancing a two-year fixed rate mortgage in the first half of next year would see monthly payments jump to £1,490 from £863. 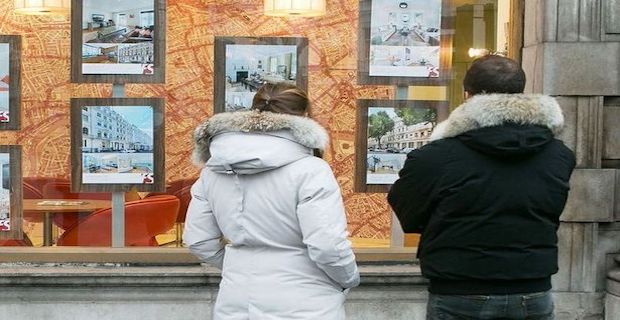 "Many simply won't be able to afford this," he said.

Virgin Money confirmed a decision to halt deals for new customers was due to the market conditions.Both Virgin and Skipton Building Society said submitted applications would still be processed. The lenders also said they would issue a new range of mortgage deals in the coming weeks.

Bank of Ireland said it had "withdrawn all residential and buy to let rates" on Monday, adding that it "will launch new ranges as soon as possible".Halifax said from Wednesday it would remove mortgage products that come with a fee "as a result of significant changes in mortgage market pricing we've seen over recent weeks".Mortgage deals which have product fees can result in lower monthly repayments for homeowners, with the fee being added to the total mortgage debt.But although mortgage rates may be lower per month, the overall cost of the loan will be higher due to more interest accruing over time.Halifax said it had not changed its mortgage rates and it continued to offer product fee-free options for borrowers.

HSBC said it had no plans to change mortgage offers, while NatWest said its rates were under "continual review in line with market conditions". Nationwide said it had not withdrawn any mortgage deals and will "continue to keep the market under review".

The statement from the Bank of England came shortly after a separate statement by the Treasury, seemingly intended to reassure investors, laying out a timetable for when more details of the government's plans would be given.It said cabinet ministers would announce measures to boost growth over the coming weeks and that the chancellor would set out a "medium-term fiscal plan", including measures to reduce the national debt, on 23 November.It also said the plan would come with a forecast of expected UK growth and government borrowing from the independent Office for Budget Responsibility, the omission of which from Friday's mini-budget had drawn criticism.By Michael Race & Dearbail Jordan/Business reporter, BBC News