Hundreds gathered last night in Edinburgh to protest the appearance of the Israeli-state-sponsored Batsheva Dance Company at the Playhouse as part of the Edinburgh International Festival. 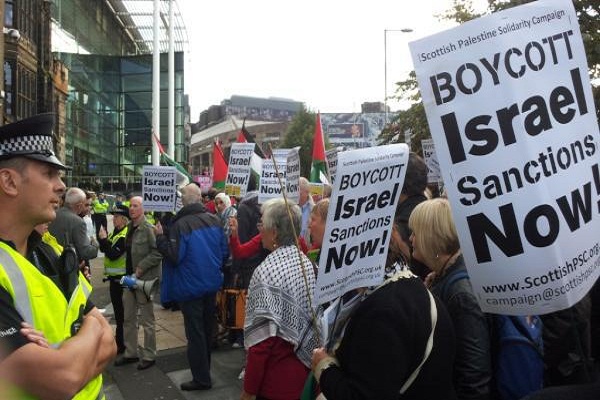 The protest had been organised by the Don’t Dance with Israeli Apartheid campaign, a Scottish based coalition made up of Palestine solidarity groups.  The campaign was established in June this year to encourage festival director Jonathan Mills to cancel the scheduled performances based on Batsheva’s links to the Israeli state.

Earlier this week, leading writers including Iain Banks and Scotland's national poet, Liz Lochhead, signed a letter calling for the scheduled performances to be cancelled.

The lively protest outside - which consisted of chanting, singing and ticket burning - resulted in some members of the public returning their tickets to the box office and joining the crowd outside.

Approximately five members of the UK Zionist Federation called a counter-demonstration to take place at the same time, and individuals attempted to distribute pro-Israeli material to groups entering the Playhouse.  Limor Livnat, the Israeli Minister of Culture and Sport, and Israel’s ambassador to the UK were inside the Playhouse.

As well as the demonstration outside, individuals disrupted the performance inside.  The protesters held up Palestine flags and large signs during the performance, which read: ‘No to Batsheva’, ‘No to Apartheid’ and ‘Free Palestine’.  The disruptions inside led to the performance being halted three times while security attempted to remove the individuals.

Kate Connelly, who disrupted the performance inside, said:

‘I believe the strong presence outside the Playhouse, coupled with the disruptions inside sent a strong message to the Batsheva Dance Company, the Israeli government and the festival organisers that the arts can never be used to distract from the reality of apartheid.’

The campaign have committed to protesting outside the Playhouse on Friday and Saturday evening, insisting that this run of protests will set a precedent for similar actions later in the year when the Batsheva Dance Ensemble are due to embark on a UK wide tour.