Apple has rattled investors with news that its sales have been slowing, blaming economic weakness in China. 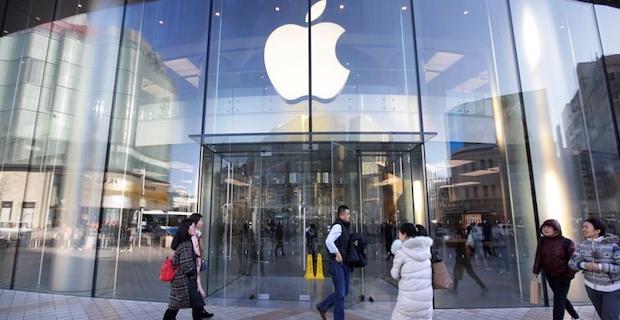 In a surprise disclosure, the iPhone maker said it anticipated revenue of about $84bn (£67bn) for the three months to 29 December.

In November it forecast sales of at least $89bn - a prediction that had already disappointed investors.

Apple's share price sank more than 7% in after hours trade, extending its more than 28% slide since November.

But revenue of $84bn would mark an almost 5% fall from the same period last year and represent the firm's first year-on-year quarterly decline since 2016.

In a letter to investors on Wednesday, chief executive Tim Cook said the firm's sales problems were primarily in its Greater China region, which includes Hong Kong and Taiwan and accounts for almost 20% of its revenue.

"While we anticipated some challenges in key emerging markets, we did not foresee the magnitude of the economic deceleration, particularly in Greater China," he said.

Wednesday's cut to the sales forecast marked the first time Apple has revised its guidance to investors in more than 15 years.

It appeared to confirm doubts about the firm's prospects that have troubled investors in recent months, contributing to the broader market sell-off.

Apple to create $1bn Texas base

Are you ready to break up with your phone?

Production cuts by major suppliers had led to worries that the firm's newest phones were not gaining traction among buyers, in part due to high prices.

"The question for investors will be the extent to which Apple's aggressive pricing has exacerbated this situation and what this means for the company's longer-term pricing power within its iPhone franchise," said James Cordwell, an analyst at Atlantic Equities.

To sum up what Mr Cook told investors: some of this is under Apple's control, and some of it isn't.

The economic realities in China - where growth is slowing - mean a region which Apple relied on heavily for new customers is no longer providing that boost. Coupled with a US-China trade war, this might get worse.

There's little Mr Cook can do about that, save lobbying hard, as he has already, for exemptions that help protect Apple's business.

But there's something else important at play here. The phenomenal smart phone era, a period that made Apple the world's richest company, is winding down. That isn't news. It's just happening more quickly than Apple had anticipated.

Better, more reliable devices, with longer-lasting batteries, mean people aren't desperate to upgrade at the end of their contract. And ask yourself: what exactly was new about the latest iPhone model? Not a lot. Not enough.

Will Apple's other products and services be enough to sustain its position?

It has been trying to diversify what it does for some time with products like the Apple Watch and other online services, which have grown quickly but fall way short of the profit gained from the all-conquering iPhone.

Trusted commentators are now expecting the company to make a major acquisition to give investors something to feel optimistic about.

The firm had warned investors in November that a strengthening dollar and economic weakness in some overseas markets would be likely to hurt sales in the last three months of the year.

Analysts also highlighted that Apple was vulnerable to the effects of the US-China trade spat, in part due to risk that the tensions could cause Chinese buyers to sour towards US brands.

"As the climate of mounting uncertainty weighed on financial markets, the effects appeared to reach consumers as well, with traffic to our retail stores and our channel partners in China declining as the quarter progressed," Mr Cook wrote in the letter.

Keywords:
AppleApple Blames China
Your comment has been forwarded to the administrator for approval.×
Warning! Will constitute a criminal offense, illegal, threatening, offensive, insulting and swearing, derogatory, defamatory, vulgar, pornographic, indecent, personality rights, damaging or similar nature in the nature of all kinds of financial content, legal, criminal and administrative responsibility for the content of the sender member / members are belong.
Related News