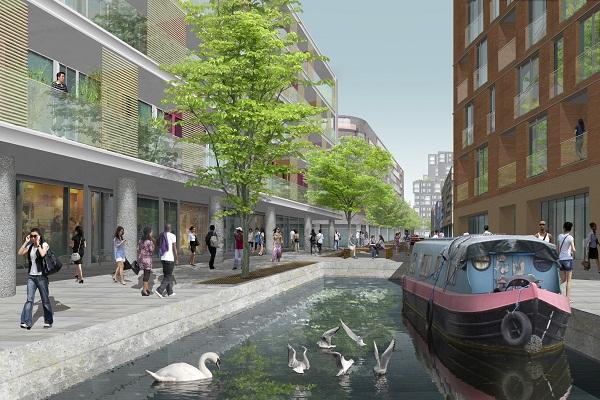 Enfield Council has unveiled a masterplan for the regeneration of a 200 acre (82 ha) area alongside North London’s Lee Valley Regional Park – to be known as Meridian Water.

The proposals will create a new mixed-use waterfront community and one of the capital’s largest regeneration and investment opportunities. When completed it will be one of the biggest eco-developments in the UK.

It has been designed to create a new opportunity for canal and riverside living in London by revitalising the valley’s waterways, improving parkland and recreational space and reconnecting the area with the resources of the Lee Valley Regional Park.

The proposals also set ambitious targets for sustainability that include plans for a comprehensive district heating network supplied by waste heat.

Meridian Water will also deliver improvements to public transport including a central transport hub linked to Angel Road Station, redirected bus routes and proposals for  improved rail services on the line connecting the area to Liverpool Street and Stratford.

Public consultation on the masterplan will run until 3 August and will seek views from local residents, businesses, community groups, investors and other stakeholders as the plans evolve.

Enfield Council's Cabinet Member for Business and Regeneration, Cllr Del Goddard, said: "Meridian Water is the most significant contribution to the transformation of Edmonton and it will play a significant role in driving the expansion of North London for decades to come. It will overcome years of decline and will create a fantastic waterfront development that people will be proud to call their home.

The Masterplan, which will be finalised at the end of the year, makes one of the largest contributions to the legacy of the Olympics. This will be one of the biggest development opportunities in the UK and the whole project will provide a massive boost to Enfield, London and the South East."

“With an emphasis on sustaining strong business and economic growth, these plans are set to revitalise the site and create opportunities to attract new investment and facilities with a particular focus on green industries.

“As well as ensuring the proposal is commercially viable, we have taken inspiration from the waterways of the Lower Lee Valley as the plans have developed, and the aim here is to give people the experience of waterside living and working while being in easy reach of the rest of the city through better transport links.”