'Domestic abuse, We can end it'

Jagonari launches campaign to work with Tower Hamlets men to end abuse of women and girls. 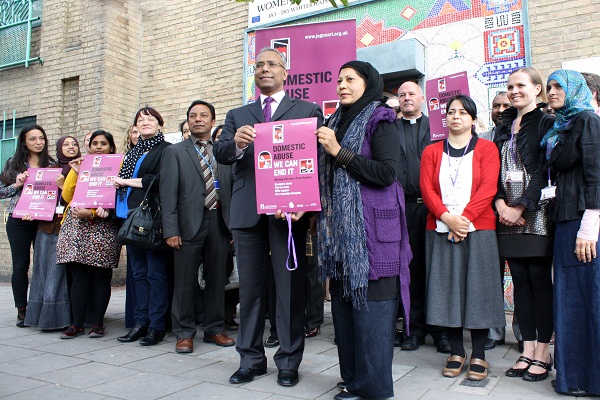 Jagonari Women’s Educational Centre launched its campaign ‘Domestic abuse: We can end it’ on Tuesday 25th September. The campaign aims to achieve a radical shift in men’s attitudes in Tower Hamlets by making them more aware of the range of behaviour that can be abusive.

The event was attended by, among others, the Mayor of Tower Hamlets, Lutfur Rahman, Detective Inspector Cliff Jones, Metropolitan Police in Tower Hamlets and the Rev Alan Green, Chair of the Interfaith Forum in Tower Hamlets.

“Whatever we can do to end domestic abuse we must do it.  I say that as a man, a Tower Hamlets resident and as mayor. I want to see an end to domestic abuse and everyone to live in dignity.”

The campaign emphasis on engagement, awareness raising and urging men to champion the cause is an unusual approach and complements other prevention activities already taking place in the borough. The campaign will run until March 2013.

Jagonari, a community organisation based in Whitechapel, is calling on men to take four actions:

• Be a campaign champion

Addressing guests at the launch, Director of the Jagonari Centre, Nurjahan Khatun said:

“The launch of this campaign marks a significant step in getting to the root of the issue of domestic abuse. We need to raise awareness among all men about what it is, the different forms it can take and what actions they can undertake to support the elimination of DA on women.

The fact that some men can commit domestic abuse without realising the social consequences of their action is unacceptable and it is, in this shift of attitude that Jagonari is interested in.”