'ARTS OF THE ISLAMIC WORLD' 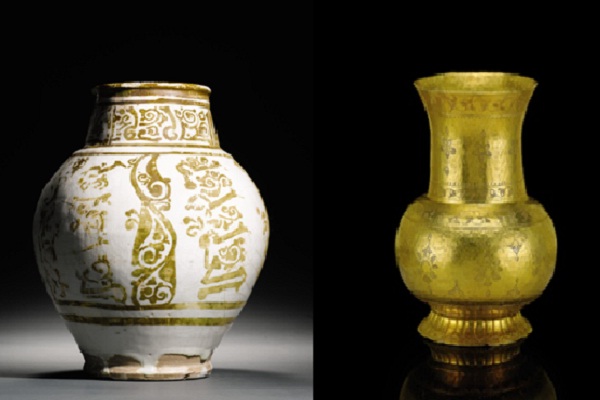 SOTHEBY’S is pleased to announce that on Friday 14th and Saturday 15th September, 2012 it will stage an exhibition in Doha, Qatar at Katara Gallery, Building 22, Katara Cultural Village, of select highlights from the company’s forthcoming London biannual ‘Arts of the Islamic World’ auction. The exhibition will feature 40 masterworks of fine craftsmanship and traditions unique to Muslim culture, which span the Islamic world and ages.

Benedict Carter, Deputy Director and Specialist of Sotheby’s Middle East Department, said: “Commencing Sotheby’s autumn/winter auction season and exhibition schedule in Qatar, we are delighted to be exhibiting choice highlights from our October Arts of the Islamic World auction at the splendid Katara Cultural Village venue in Doha. The exhibition includes pieces which span the depth and breadth of Islamic culture and geography.”

Headlining the exhibition of highlights from Sotheby’s London October 3rd Arts of the Islamic World auction, will be a large and highly important 10th/11th century Fatimid white-ground lustre pottery jar, from Egypt. This exquisite jar belongs to a small group of surviving Fatimid lustre jars, published examples of which are presently in the Al-Sabah Collection, Kuwait, the Benaki Museum, Athens, the Aga Khan Collection, Toronto, and the Victoria and Albert Museum, London. The vast majority of extant Fatimid lustre pottery is fragmentary and intact pieces are exceptionally rare to market. This jar exemplifies the magnificence of the lustre pottery technique which reached its height in the eleventh century, reflecting the power and patronage of the Fatimid empire. It is estimated at £300,000-500,000.

Carrying the same estimate of £300,000-500,000 as the Fatimid pottery jar, is a rare and important early Islamic silver-gilt and nielloed parcel-gilt cup with Kufic inscription, from Persia, dated 11th/12th century. This cup not only presents an extremely rare example of early Persian silverware, but it also displays a variety of decorative techniques, rendering it of both art-historical and academic importance. The inscriptions on the present jug confer a number of blessings and wishes of good fortune on an unidentified owner. Nonetheless, it is the intricate incised and nielloed decoration on the body of the piece which displays the technical mastery and sophistication of silver metalworkers of this period.

An extremely rare pair of silk lampas trousers, Sogdiana, central Asia, bear eloquent witness to the quality and splendour of Sogdian silk cloth production of the 7th and 8th centuries. Their unique style and decoration, with references to Chinese, Sogdian and Sasanian models, is indicative of the far-reaching trading network existant at that time, from China, through Eastern Central Asia and Tibet, to Sogdiana. The decorative ornamentation is linked to early Sasanian archetypes. Such motifs would have conveyed the traditional associations of power and wealth and were widely adopted at the many cosmopolitan trading- and production-centres along the Silk Road. The trousers are estimated at £200,000-300,000.

A further ceramic highlight of the exhibition is an important late 12th/early 13th century mina'i bowl with a falconer on horseback, from Persia, which comes from the collection of Harvey B. Plotnick. This bowl, which carries an estimate of £80,000-120,000, is a fine example of the mina'i technique and its expressive and painterly characteristics. Mina'i or 'enamelled' wares are believed to have originated at Kashan in the late-12th century where the lustre technique was already thriving. This new technique of decorating pottery with enamels in a second firing increased the range of colours available to the potters. The figural representation of horsemen is often used on such wares and notably, the courtly pastime of falconry is portrayed on this bowl. It represents a popular subject in Persian romance and poetry as well as in the miniature paintings that accompanied them.

Also on view is a 14th century central Asian gold cup with incised and pin-pricked decoration. This extremely decorative cup, which was once in the collection Carl Kempe, is estimated at £30,000-50,000. Surviving pieces of early gold from Central Asia are extremely rare (since gold was commonly melted down and minted for coinage) and provide a unique insight into the cross-pollination brought about by commercial and cultural exchange along the Silk Road, in particular exchange between China, Persia and the Arab lands of the Near East. This striking gold cup can be compared with a variety of models from the Mongol and Timurid periods of the 13th to 15th centuries.

Highlighting the manuscript section of the exhibition is a rare Qur'an leaf in late Hijazi script. This late 7th-early 8th century east or Arabian peninsula leaf is written in a transitional script that lies between Hijazi and Kufic, and demonstrates a crucial phase in the development of Qur’anic scripts in the earliest period of the Islamic era (est. £100,000-150,000).

A magnificent 18th century Mughal gem-set jade-hilted dagger, India, headlines the weaponry on view. A similar Mughal hilt composed of nephrite jade and set with diamonds and rubies in gold, but with a slightly varying shape, is in the Victoria and Albert Museum (est. £40,000-50,000).