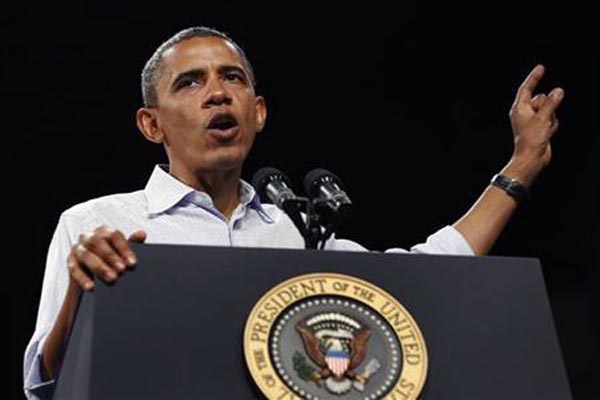 US President Barack Obama and his top military and national security advisers hashed out options on Saturday for responding to the alleged use of chemical weapons in Syriaa mid "increasing signs" that the government used poison gas against civilians. Obama spoke with British Prime Minister David Cameron, a top U.S. ally, and agreed that chemical weapon use by Syrian President Syrian President Bashar al-Assad's forces would merit a "serious response," a spokesperson for the prime minister said in a statement. Syrian opposition accounts that between 500 and well over 1,000 civilians were killed this week by gas in munitions fired by pro-government forces, and video footage of victims' bodies, have stoked demands abroad for a robust, U.S.-led response after 2 1/2 years of international inaction on Syria's conflict. Syria sought to avert blame by saying its soldiers had found chemical weapons in rebel tunnels. U.S. Secretary of State John Kerry called his Syrian counterpart on Thursday to chide the government for not allowing U.N. inspectors access to the site. Obama has been reluctant to intervene in Syria's civil war, but reports of the killings near Damascus have put pressure on the White House to make good on the president's comment a year ago that chemical weapons would be a "red line" for the United States.

The United States is repositioning naval forces in the Mediterranean to give Obama the option for an armed strike.

"President Obama has asked the Defense Department to prepare options for all contingencies," U.S. Defense Secretary Chuck Hagel told reporters in Malaysia as he began a week-long trip to Asia.

"We have done that and we are prepared to exercise whatever option - if he decides to employ one of those options."

The White House declined to list what options were discussed on Saturday and said Washington was still gathering details about the attack.

"In coordination with international partners and mindful of the dozens of contemporaneous witness accounts and record of the symptoms of those killed, the U.S. intelligence community continues to gather facts to ascertain what occurred," it said in a statement.

American and European security sources have said U.S. and allied intelligence agencies made a preliminary assessment that chemical weapons were used by Syrian forces in the attack. The United Nations has requested access to the site.

"They are both gravely concerned by the attack that took place in Damascus on Wednesday and the increasing signs that this was a significant chemical weapons attack carried out by the Syrian regime against its own people," the spokesperson said.