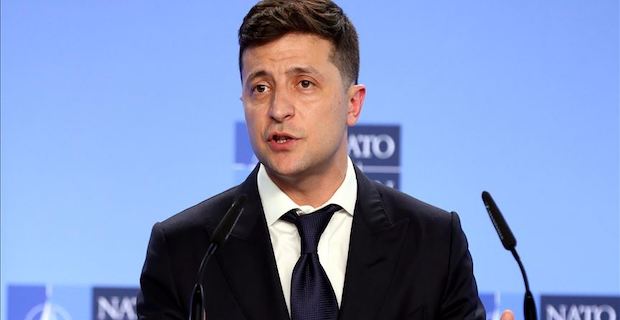 Ukrainian president on Tuesday said his country still seeking to be a member of NATO and the European Union (EU) and said the country is ready to negotiate with Russia. Volodymyr Zelensky’s remarks came at a joint press event with NATO Secretary-General Jens Stoltenberg in Brussels, the Ukrainian president’s first official visit abroad since assuming the presidency.  “The strategic course of Ukraine to achieve full-fledged membership in the EU and NATO ... remains unchanged,” Zelensky said. “This is the priority of our foreign policy.”

“We are ready to negotiate with Russia. We are ready to implement the Minsk agreements. However, we must first be able to protect ourselves and to become stronger in economic, political and military terms,” he added.

Stoltenberg, for his part, referred to Ukraine as a “highly valuable partner”, and thanked the country for its contribution to NATO operations in Afghanistan and Kosovo.

“Allies do not, and will not, recognize Russia’s illegal annexation of Crimea. And we condemn Russia’s aggressive actions in the Black Sea region,” he added.

Ukraine has been wracked by conflict in its eastern regions since March 2014 after Russia’s annexation of Crimea.

The EU heavyweights Germany and France had co-sponsored the Minsk ceasefire agreement in February 2015. Some 13,000 people have been killed in the conflict since 2014, according to the UN.

Keywords:
UkraineZelenskyUkrainian President
Your comment has been forwarded to the administrator for approval.×
Warning! Will constitute a criminal offense, illegal, threatening, offensive, insulting and swearing, derogatory, defamatory, vulgar, pornographic, indecent, personality rights, damaging or similar nature in the nature of all kinds of financial content, legal, criminal and administrative responsibility for the content of the sender member / members are belong.
Related News