A double-decker bus crashed into a shop in south London leaving two women trapped on the top deck. 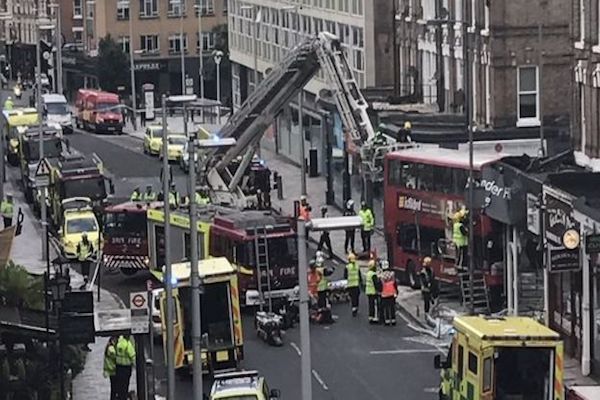 One eyewitness said he felt the bus drifting before it crashed into the front of the Poggen Pohl Kitchen Design Centre in Lavender Hill, causing the shop front to collapse. The driver of the bus has been taken to hospital. London Ambulance Service said 10 people had been treated by paramedics and three had been taken to hospital. It said it had sent five ambulance crews, two paramedics and an incident response officer to the scene at about 06:55 BST, along with an air ambulance. Andrew Matthews, 34, from Wandsworth, was one of about a dozen passengers on the bus. "I was on the top floor at the back, fortunately," he said. "I noticed the bus drifting. I heard a smash and saw the roof of the shop going through [the bus] from the front left. It went to the fourth or fifth row. "I wedged myself in, bracing myself. As soon as the bus came to a stop there was yelling, screaming. "I noticed a lady wedged in the front right-hand side. She was screaming for help. There was a lot of blood." Another passenger, nurse Amy Mullineux, 40, from Wandsworth, said the driver told her he had lost consciousness before the crash. "I spoke to him. He said he blacked out before the bus hit the shop. He doesn't remember hitting anything. "The paramedic told me they think he had some kind of fit."