Turkish Economy Minister Mustafa Elitas has said the Middle Corridor, a proposed transportation network extending from the Caspian Sea through Turkey and Azerbaijan to Central Asia and China, will boost economic recovery in the region 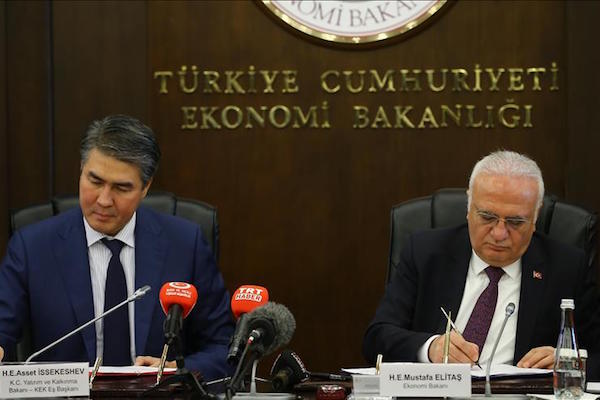 ANKARA (AVRUPA TIMES)-Turkish Economy Minister Mustafa Elitas has said the Middle Corridor, a proposed transportation network extending from the Caspian Sea through Turkey and Azerbaijan to Central Asia and China, will boost economic recovery in the region.

Addressing the 9th Joint Economic Commission between Turkey and Kazakhstan in the capital Ankara Saturday, Elitas said an increase in trade agreements through the commission would boost economic activity following a decline in trade after ties between Turkey and Russia became tense late November last year, which affected the economy along the Caspian Sea.

According to the minister, a 5.1 percent growth over the past six years took place despite the financial crisis.

He said the Middle Corridor would become a great opportunity for economic recovery in the region with a boost in transportation and agriculture trade as well as many other sectors.

He also saw it as an opportunity to “strengthen ties and deepen relations through increased logistics and trade activity in the Turkic world”.

The Middle Corridor will also become a pathway for Kazakhstan into Europe through Turkey, he added.

However, whilst the port of Aktau in Kazakhstan is not ready for large scale activity, Turkish companies say they are ready to support Kazakhstan to increase the capacity of the port as part of increased trade agreements between the two countries.

Kazakhstan's President Nursultan Nazarbayev is expected to make an official visit to Ankara in April for the signing of the New Strategy Partnership Economic Program 2016-2020, which will finalize the deals discussed by the representatives at the joint commission.

Photo: Turkish Minister of Economy Mustafa Elitas (right) and Kazakhstan's Investments and Development Minister Asset Issekeshev (left) are seen during 9th period meeting of Turkey-Kazakhstan Intergovernmental Economy Commission, at Ugur Ercan Meeting Hall, Ministry of Economy, in Ankara, Turkey on March 12, 2016. (Photo by: Volkan Furuncu)
Your comment has been forwarded to the administrator for approval.×
Warning! Will constitute a criminal offense, illegal, threatening, offensive, insulting and swearing, derogatory, defamatory, vulgar, pornographic, indecent, personality rights, damaging or similar nature in the nature of all kinds of financial content, legal, criminal and administrative responsibility for the content of the sender member / members are belong.
Related News