Putin’s new six-year term puts him on track to be Russia’s ruler for over two decades, as he has served continuously as either president or prime minister since 1999 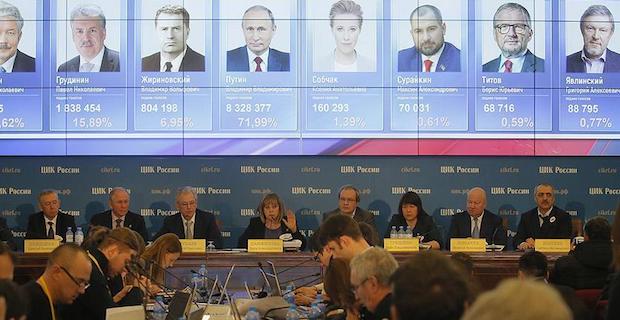 The election took place without major irregularities, according to preliminary reports of observers.

But Ella Pamfilova, the head of Russia’s Central Election Commission (CEC), denied this was a problem.

In addition, there were claims that people were forced to go to polling stations. The opposition says Putin benefits from high voter turnout, as though he was the most popular candidate, his supporters are not very active.

Many methods were used to attract them to the polls. Competitions and sales were organized. There were also rumors that employees of state-funded organizations got oral orders to take part in the vote or face retaliation.

According to the election commission, about 108 million Russians went to the polls, with voter turnout of 67 percent.

Pamfilova explained the high turnout by good publicity and promotion, facilitating people voting when not at their place of residence, and arranging mobile polling stations, including railway stations and airports. She said she also believes that the Russians showed up due to Western pressure.

There were also some complaints about the campaign period.

Opposition candidate Grigory Yavlinsky claimed that showing documentaries about Putin during the campaign violated the rules because “these films are propaganda that tell us that Russia can have no other president but Putin."

Communist Pavel Grudinin also complained that the election commission had told voters too much about his own foreign financial holdings, thereby hurting his campaign.

Over 1,500 observers from 11 countries followed Russia’s presidential election, including ones from the Organization for Security and Cooperation in Europe (OSCE). The OSCE is set to hold a press conference on its preliminary findings and conclusions on Monday.

Putin says this is his last term

Putin won the election with a record margin, garnering 76.67 percent of the votes, with 99.75 percent of ballots counted, according to results on Monday.

Speaking to reporters in Moscow on Monday, Putin promised that this term as president would be his last. When asked if he plans to run in the 2030 presidential elections, he replied negatively.

Grudinin’s failure is associated with the change in generations. Soviet times are much forgotten, and in Russia’s modern history the Communists are absent. Traditionally pensioners supported the Communists, but their numbers are shrinking over time.

Almost 3.5 percent of votes were won by candidates who are considered opposition: Ksenia Sobchak, Grigory Yavlinsky, and Boris Titov. That 3.5 percent represents several million people. The vote show that people dissatisfied with Putin’s rule are concentrated in cities.

For the first time, voters in Crimea were allowed to cast ballots. Turnout on the peninsula was strong, with people lining up in the morning.

The UN General Assembly has proclaimed Russian’s 2014 annexation of Ukraine illegal, and the U.S., EU, and Turkey among other countries do not recognize Crimea as Russian territory.

In the rest of Ukraine, police and protesters did not let Russians vote at diplomatic missions. In response to the problem, the OSCE urged Russia and Ukraine to resolve it themselves.

Citizens of Russia were also unable to vote in Georgia, where they were invited to exercise their voting rights in other states.

A ballot count at the Khmeimim Russian air base in Syria found that Putin won 100 percent of the votes.

Keywords:
Vladimir Putin ReelectedVladimir Putin
Your comment has been forwarded to the administrator for approval.×
Warning! Will constitute a criminal offense, illegal, threatening, offensive, insulting and swearing, derogatory, defamatory, vulgar, pornographic, indecent, personality rights, damaging or similar nature in the nature of all kinds of financial content, legal, criminal and administrative responsibility for the content of the sender member / members are belong.
Related News