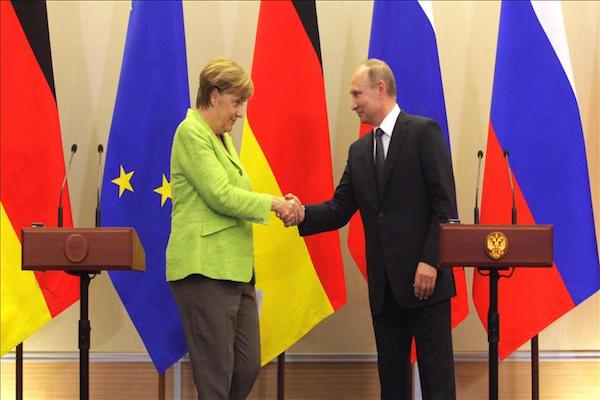 Russian news agency TASS reported that Putin called for an “unbiased investigation” over a chemical weapons attack in Syria that killed scores earlier last month. “Naturally, those responsible for the death of Syrians [in the chemical weapons attack in Idlib] must be found and punished,” Putin said during a press conference with German Chancellor Angela Merkel in Russia’s Black Sea city of Sochi, TASS reported.

“But it should be done only after a thorough and unbiased investigation,” Putin added. “We resolutely condemn any use of chemical weapons,” he added. The Khan Sheikhun attack April 4 killed at least 100 people and injured more than 500, according to the Syrian opposition’s health minister. On April 12, Russia shot down a UN Security Council draft resolution that would have condemned the chemical weapons attack.

The two leaders also discussed the Astana and Geneva peace negotiations. “We are confident that a solution to the Syrian problem can be found only through United Nations-brokered peace talks,” Putin said. Syria has been locked in a vicious civil war since early 2011 when the Assad regime cracked down on pro-democracy protests with unexpected ferocity. Several rounds of peace talks -- in Geneva and the Kazakh capital Astana -- have so far failed to end the conflict, in which hundreds of thousands of Syrian civilians are believed to have been killed to date.

“We share the same position concerning the fight against international terrorism. Germany and Russia can cooperate even closer in this area,” TASS quoted Merkel as saying. The two leaders also discussed the situation in eastern Ukraine, which has been marred by conflict since March 2014 following Russia’s annexation of Crimea. “We want to ensure Ukraine’s access to its own state border,” said Merkel.