Fire broke out on passenger train due to gas cylinder blasts 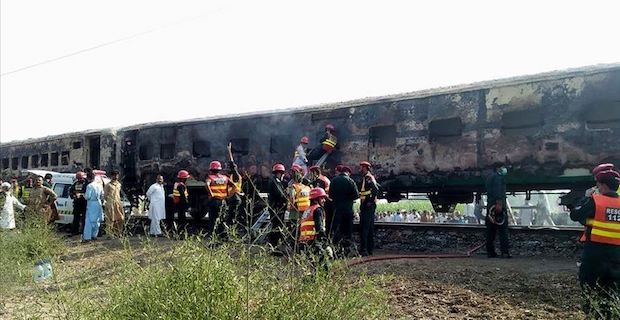 The death toll from a fire on a passenger train traveling through northeast Pakistan has risen to 74, a local official said late Thursday. Yasmin Rashid, the health minister of Punjab province, said the toll climbed to 73 with eight bodies discovered after the fire was extinguished and a cooling and search operation was conducted and hit 74 when one of the passengers succumbed to their wounds at a hospital.

Rashid said a total of 200 passengers were aboard the three train cars that caught fire.

Railway Minister Sheikh Rasheed Ahmad said the fire erupted after two gas cylinders exploded and that some passengers died after jumping out of the moving train. 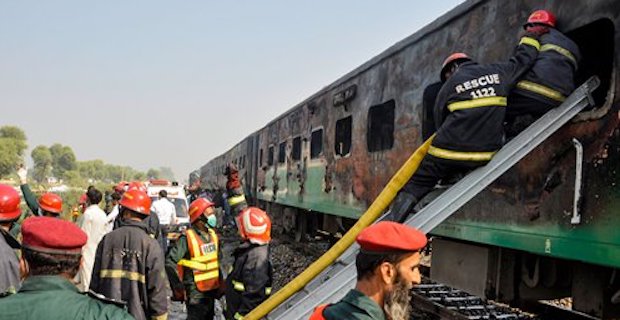 Local TV footage following the explosions revealed there were gas cylinders near the accident site and their explosion may have triggered a chain reaction in the train cars.

Ahmad added that the fire spread to three cars, two of which were carrying members of Tablighi Jamaat -- a global Islamic missionary movement.

Army troops including doctors and paramedics were dispatched to the accident site for rescue and relief operations.

Bakir Hussein, head of the district rescue service, said some of the bodies were unrecognizable and their identities could only be determined through DNA analysis.

A survivor, Mohammad Imrah, said he was in one of the train cars at the time of the explosions and the fire quickly engulfed the area, causing a massive panic among passengers.

“When I moved towards the window to save my life, there was this queue of people seeking to jump out of the train,” he said.

A doctor at Liaqatpur Hospital, Mohammed Nadim Zeya, said some of the passengers died from blunt trauma after jumping out of the train.

Pakistani President Arif Alvi expressed his sorrow over the incident and offered condolences to those who lost loved ones.

Prime Minister Imran Khan said he instructed officials to launch an investigation into the incident.