Barack Obama avoided answering a question regarding the wire-tapping of Turkish PM Recep Tayyip Erdogan in his interview with Germany's ZDF. 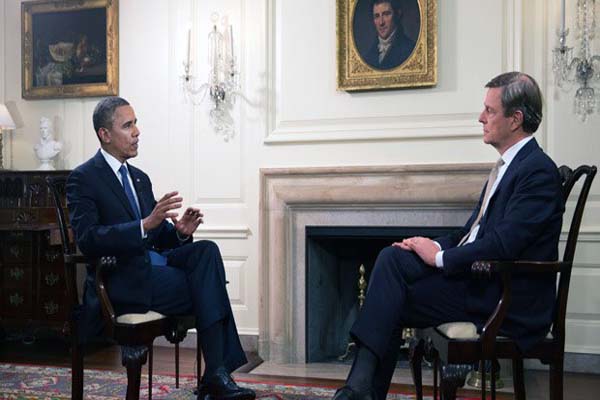 US President Barack Obama refused to answer a question regarding intelligence activities in Turkey and on Turkish Prime Minister Recep Tayyip Erdogan, while saying that he would not let intelligence work damage relations between Gemany and US.  In a rare interview on German TV, Obama set out to mend ties frayed last year by media reports citing leaked intelligence documents that Washington was spying on world leaders and their citizens. Claus Kleber of the German television station ZDF asked Obama: "But there are limits, even within NATO allies. We have a very difficult situation in Turkey right now. Your intelligence agencies must be interested in communications of president Erdogan. Would he be off limits because the president doesn’t want this to happen?" Barack Obama refused to respond to the question, and only said: "I’m not going to comment on country by country."

Meanwhile, Obama said that they would continue to be interested in the government intentions of countries around the world.

The Turkish government has a strong relationship with US and NATO countries. Howver, the recent corruption probe which has gripped Turkey since police operations targeted ruling AK Party loyalists and bureaucrats on December 17 has revived questions about intelligence services in the country. The government removed many police officers who work in the intelligence service after the probe.

In the past, several bugs were found in Prime Minister Recep Tayyip Erdogan's working office.

Media outlets reported that the National Security Agency gathers nearly 200 million text messages a day from around the world and has put software in almost 100,000 computers, allowing them to spy on users even when they are offline.