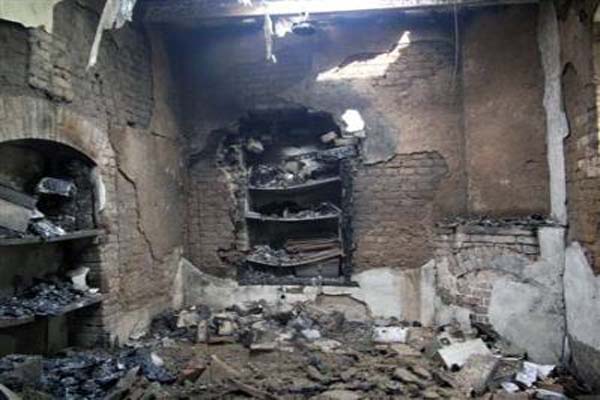 The assault on the heavily guarded Central Prison in the city of Dera Ismail Khan took place despite reports that regional officials had received intelligence a fortnight ago suggesting such an attack was imminent. Despite promising peace talks with the insurgents during an election campaign earlier this year, Prime Minister Nawaz Sharif appears to be accepting that the use of military force may be unavoidable after a series of high-profile attacks. The Pakistani Taliban said they had sent a squad of 100 fighters and seven suicide bombers on a mission to free some of their top leaders, and they said they released 250 prisoners - a number roughly matched by local Pakistani authorities. Fighting continued into the early hours of Tuesday, with explosions and machine gunfire rattling the city in Khyber Pakhtunkhwa province, on the edge of Pakistan's lawless tribal regions bordering Afghanistan. At least 12 people were killed, officials said, including five policemen and four prisoners from the minority Shi'ite sect whose throats were slashed by gunmen, officials said. The Taliban are mostly majority Sunni Muslims.

Mushtaq Jadoon, the town's civil commissioner, said the 253 escaped prisoners included 30 top militants and six people on death row. Those who escaped are believed to have been whisked away to nearby South and North Waziristan, areas where the Taliban has strongholds.

As the attack unfolded, gunmen blew up electricity lines to the prison and detonated bombs to breach the outer walls.

They fought their way inside using rocket-propelled grenades and machine guns, and called the names of Taliban prisoners they wanted to release through loud speakers.

Once inside, attackers shot open most of the locks and used bombs to blast their way deep into the prison, shouting "All the locks are broken! Those who want to escape, now is your chance," prison officials who were there at the time told Reuters.

Security forces said they had imposed a curfew on the city and the gunbattle was over by dawn. A Reuters reporter at the scene saw security forces and bomb disposal squads conducting searches amid ruined walls strewn with bullet holes.

Police Constable Gul Mohammed said he had been rushing to the scene when he was confronted by two boys holding rifles.

"They told me to stop," he told Reuters. "I told them I am a policeman, and that's when they opened fire." He added that he was shot three times.

The attack came a year after a similar mass jailbreak in the northern town of Bannu which Taliban militants said was carried out with inside help from prison guards.

There was no official comment from the central government.

The audacity of the latest assault raised embarrassing questions over how well-prepared security forces are following a series of high-profile attacks, and underscores the challenges facing Pakistan's new government in combating the militancy.

The heavily guarded jail at Dera Ismail Khan houses around 5,000 prisoners. Around 250 are Pakistani Taliban and members of banned sectarian groups such as Lashkar-e-Jhangvi, a Sunni militant group that has killed hundreds of Shi'ite civilians this year.

The attack comes the day lawmakers are due to choose a new president in a largely ceremonial vote, and two days before a major Shi'ite festival which security officials have warned could be attacked.

"It was a heavily guarded jail and considered one of the most protected prisons in the province," said a senior government official in Peshawar, capital of Khyber Pakhtunkhwa.

"We will investigate how the militants managed to come from the distant tribal areas and break into the jail and take away their people."

He said phone intercepts indicated the militants had been planning a jail break and interrogations of captured fighters confirmed it. Security officials had alerted the provincial governor of the threat based on the intercepts.

As the gunbattle unfolded, gunmen took over a nearby house and hospital, holding the residents hostage as they fired on police from the rooftops and laid ambushes for reinforcements.

A senior Taliban official told Reuters separately the attack on the prison was masterminded by Adnan Rashid, a Taliban commander who was himself freed when his prison in the northern town of Bannu was overran by militants last year.