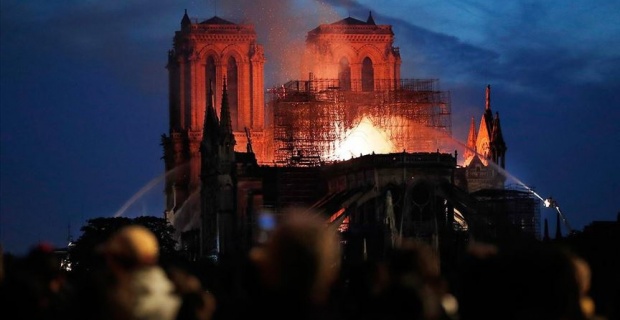 A massive fire at the Notre Dame Cathedral in Paris has been extinguished after 8.5 hours, a spokesman for the local fire brigade said late Monday.

Firefighters will continue to ensure that the fire, which seriously damaged the iconic landmark, does not resume, Lieut. Col. Gabriel Plus told reporters.

“The worst was avoided, even if the battle has not been completely won yet, and the next few hours will be difficult," Macron told reporters after inspecting the scene.

He said a national fundraising campaign would be launched to restore the 850-year-old monument.

The cause of the fire is still unknown. ‏

One of the city’s most important tourist spots, Notre Dame -- which means 'Our Lady' -- dates back to the 13th century.

Turkey joined the rest of the world in expressing dismay over the massive fire which engulfed the historic masterpiece.

"We are following the fire destroying the cathedral of Notre Dame in Paris with great sorrow," Foreign Minister Mevlut Cavusoglu said on Twitter.

"The destruction of this masterpiece of architecture is a catastrophe for the entire humanity," he added.

"It is with very heavy hearts that we received the devastating news about the fire in Paris, France. The Notre Dame Cathedral is not just a symbol of France but part of humanity’s shared heritage," Turkey’s presidential communications director Fahrettin Altun tweeted.

Keywords:
Emmanuel MacronNotre Dame CathedralFrench PresidentNotre Dame Cathedral Fire
Your comment has been forwarded to the administrator for approval.×
Warning! Will constitute a criminal offense, illegal, threatening, offensive, insulting and swearing, derogatory, defamatory, vulgar, pornographic, indecent, personality rights, damaging or similar nature in the nature of all kinds of financial content, legal, criminal and administrative responsibility for the content of the sender member / members are belong.
Related News