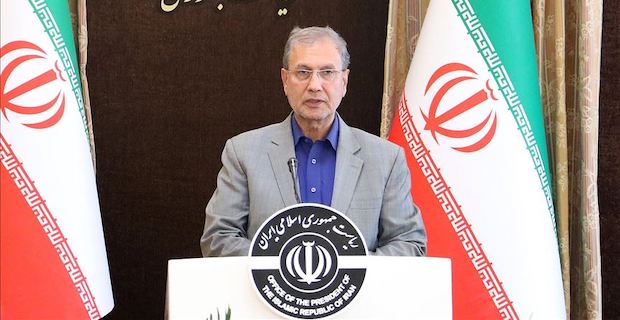 Iran on Friday denied being responsible for the downing of a Ukraine International Airlines jet that crashed Wednesday in Tehran, calling the allegation a lie and psychological operation of the U.S., the state-run IRNA news agency reported.

In a statement, government spokesman Ali Rabiei said a committee in charge of investigating the incident has been formed on the basis of regulations of the International Civil Aviation Organization (ICAO).

Rabiei said the committee will investigate the crash immediately and transparently with the participation of experts from relevant countries.

He stressed that a Ukrainian representative is already in Iran to examine the plane’s black box.
"We also welcome the presence of the relevant states whose nationals were killed in the bitter incident in the investigation process," he added.

Rabiei said the allegation that the plane was hit by Iranian missiles is a calculated move and psychological operation.
He said footage that was published is a lie and no one will take responsibility for it.
He also invited the U.S. to attend the investigation committee instead of lying and engaging in psychological operations.

Meanwhile, Iran's Foreign Ministry spokesman Abbas Mousavi said on Friday that Iran "has invited both Ukraine and the Boeing company to participate in the investigations," according to a statement carried by state-run IRNA news agency.

The spokesman said he would also welcome experts from other countries whose citizens died in the accident.
The Boeing 737-800 crashed shortly after takeoff from Tehran’s Imam Khomeini International Airport just hours after Iran's Islamic Revolutionary Guards Corps (IRGC) launched more than a dozen ballistic missiles targeting U.S. troops in Iraq in retaliation for the assassination last week of Qassem Soleimani, the head of the IRGC’s Quds Force, outside Baghdad International Airport in a drone strike.
Some 176 people died in the crash, including Iranians, Canadians, Ukrainians, Swedes, Afghans, Germans and British citizens.

Keywords:
IranUkraine Plane Crash
Your comment has been forwarded to the administrator for approval.×
Warning! Will constitute a criminal offense, illegal, threatening, offensive, insulting and swearing, derogatory, defamatory, vulgar, pornographic, indecent, personality rights, damaging or similar nature in the nature of all kinds of financial content, legal, criminal and administrative responsibility for the content of the sender member / members are belong.
Related News