We want to bring stability to Middle East, and nuclear agreement is part of that: Macron tells Netanyahu 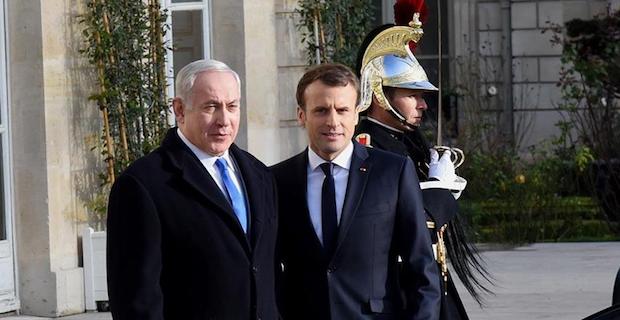 The Iranian nuclear deal should be preserved to maintain regional peace, President Emmanuel Macron said on Tuesday following his meeting with Israeli Premier Benjamin Netanyahu in Paris. "My colleagues in Europe and I think that there is a need to preserve the nuclear agreement, but we are concerned about Iran's activities in the Middle East," Macron said at a joint news conference after the meeting.The nuclear deal, also known as Joint Comprehensive Plan of Action (JCPOA) was signed between Tehran and world’s major powers China, Russia, France, the U.K., and U.S., plus Germany.U.S. President Donald Trump last month pulled the U.S. out of the nuclear agreement with Iran, claiming that Iran was running a secret program to build nuclear weapons.

France wants to achieve "in the long term, a complete package where we would have the 2015 nuclear agreement supplemented by three agreements" on ballistic activities and the role of Iran in the region, he said.

Macron told Netanyahu the Joint Comprehensive Plan of Action agreement should "be preserved", even if it is "not enough or fully satisfactory".

"We want to bring stability to the Middle East, and the nuclear agreement is part of that, but it should be extended by an additional 10 years, and we should consider Iran's aggression in the region and its ballistic missile program," he said.

The French president warned all parties against an "escalation" that could lead to conflict after Iran announced an increase in its uranium enrichment capacity.

"I invite everyone to stabilize the situation and not give in to this escalation because it would only lead to one thing, the conflict," he said.

In his statement, Netanyahu said he was not seeking French withdrawal from the 2015 Iran deal since he believes economic pressure will dismantle it.

"I didn't ask France to withdraw from JCPOA because I think it will be dissolved by weight of economic forces," he said.

"I preferred to focus on stopping Iranian aggression in the region."

He slammed the shifting of the U.S. Embassy to Jerusalem, saying it only led to people dying and did not promote peace efforts.

"If this leads to people dying it’s not a celebration," he said.

About the killing of hundreds of Palestinian civilians in Gaza, Macron said he made it clear to Netanyahu that he was "concerned about the events of the last few weeks on the Gaza border that threaten the peace process".

A total of 123 Palestinians have been martyred and 13,000 others injured by Israeli army fire since the start of anti-occupation protests in the Gaza Strip late March.

"We condemn violence against civilians, including the violence of Hamas. France wants to be part of the solution to the humanitarian crisis in Gaza," Macron added.

Netanyahu for his part reiterated his description of the demonstrations held by unarmed Palestinians in Gaza as "violent riots" and blamed it on Hamas.

"We are not talking about civilians and reality is not what we would see from here. We maintain our right to defend ourselves," he said.

Thousands of people have marched in the streets of Paris in protest against Netanyahu's visit.

The Israeli army continues to use live ammunition against Palestinians who demand "returning to the lands they were exiled from and an end to the illegitimate blockade Israel has imposed on Gaza since 2006".

Keywords:
Israeli PremierBenjamin NetanyahuEmmanuel Macron
Your comment has been forwarded to the administrator for approval.×
Warning! Will constitute a criminal offense, illegal, threatening, offensive, insulting and swearing, derogatory, defamatory, vulgar, pornographic, indecent, personality rights, damaging or similar nature in the nature of all kinds of financial content, legal, criminal and administrative responsibility for the content of the sender member / members are belong.
Related News