Fourteen Martyrs who were children killed in 1974 laid to rest ! Cypriot EOKA-B terrorists

The remains of a total of 14 children, seven girls and seven boys, between the ages of four months and 16 years from Muratağa and Sandallar Villages, who became martyrs following an attack by EOKA-B terrorists on 14th August 1974 were laid to rest following a military ceremony. The remains of the children had been identified following DNA testing at the excavations executed by the Committee on Missing Persons in Cyprus. 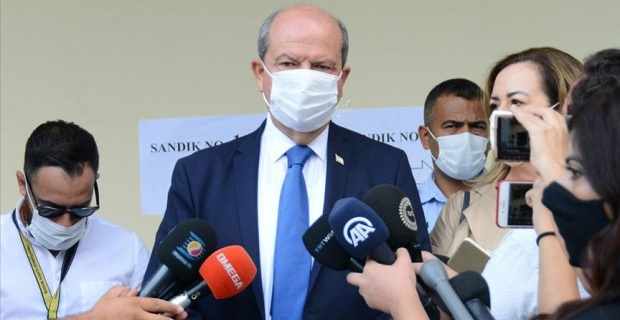 On 20th July 1974, all men of fighting age were taken away as prisoners of war to prison camps and immediately after the launch of the second peace operation of the Turkish Army on 14th August 1974, EOKA-B, a Greek Cypriot terrorist organisation, killed almost the entire population of three villages, mostly women and children aged between 16 days old to 95 years old.
President of the Turkish Republic of Northern Cyprus Ersin Tatar attended the ceremony and said that the families of the 14 Martyrs have been in deep sorrow for 46 years. President Tatar also underlined that this event shows that the two people of the island cannot live together and if there will be a sustainable solution in Cyprus it should be under the effective and efficient guarantee of Turkey.

Oktay: "The painful memories have come before us once again"

Turkish Vice President Fuat Oktay stated that the farewell to our children who were martyred by EOKA once again brought back the painful memories.
Oktay shared on his Twitter account regarding the identification through DNA tests of 14 children who were martyred in the massacres in Muratağa-Sandallar by the Greek Cypriot terrorist organization EOKA-B in 1974 and commemorated 46 years later.Turkish Vice President Oktay said: "The farewell to our children, who were martyred in the EOKA atrocities in the TRNC, to their eternal resting place brought the painful memories back to us once again. The mentality that ignores, tries to destroy and condones the Turkish presence on the island is still alive today. Turkey will stand by Turkish Cypriots as of yesterday, today, and tomorrow with all the facilities, and will continue to protect their life, property, rights and interests with determination. The whole world should see this reality and contribute to the process towards a just solution.

New measures have been announced against the Covid-19 pandemic, which continues to affect the TRNC together with the whole world.
In accordance with the decisions taken at the meeting of the Infectious Diseases Supreme Committee held on Friday (25/12/2020); activities in places such as cafe, restaurant, patisserie, betting office, hairdresser, beauty centre, massage parlour, gym, pitta shop, simit shop, barber shop will cease as of today (28/12/2020) after 21:00 pm. Only take-away services will be allowed from 21:00 pm.
While the decision to close taverns, bars, clubs and similar entertainment venues was extended until 4 January, 2021, the ban on New Year's celebrations were repeated; and regulations regarding public transportation were made.
The decision to stop the arrival of those who intend to come to the TRNC by air and sea without quarantine for three days or less has been extended indefinitely.
It was deemed appropriate to allow UN, EU, British Bases, Buffer Zone and UNFICYP employees to cross the border gates provided they submit negative PCR tests conducted in the last week.

Keywords:
Killed In 197414 MartyrsCypriot EOKA-B Terrorists
Your comment has been forwarded to the administrator for approval.×
Warning! Will constitute a criminal offense, illegal, threatening, offensive, insulting and swearing, derogatory, defamatory, vulgar, pornographic, indecent, personality rights, damaging or similar nature in the nature of all kinds of financial content, legal, criminal and administrative responsibility for the content of the sender member / members are belong.
Related News