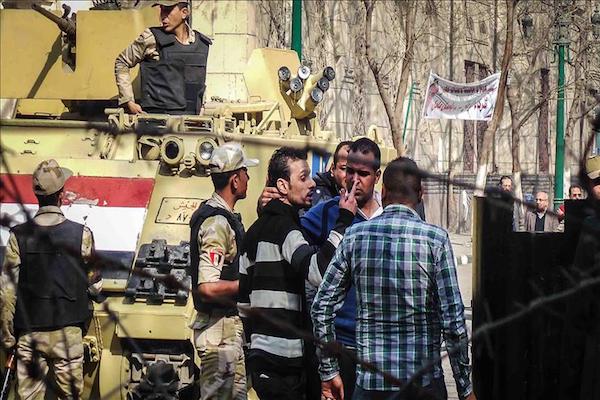 The 18-day uprising in 2011 forced autocratic President Hosni Mubarak to step down after three decades in power. Although anti-regime demonstrations failed to materialize in the capital, limited protests were reported in the rural Fayoum, Beni Sueif and Mansoura provinces and in the coastal province of Alexandria.

Demonstrators carried Egyptian flags and banners reading, "The revolution goes on" and "Open the squares to protesters".

Throughout the country, Egyptian security forces cordoned off public squares and main streets and set up numerous checkpoints.

In Cairo’s Tahrir Square, meanwhile, the epicenter of the 2011 uprising, small knots of people turned out to voice their support for Egypt’s military-backed regime.

"The army and people are one hand," they shouted. Others chanted, "Long live Egypt."

At one point, a handful of policemen distributed roses to passersby to mark "Police Day" -- an Egyptian national holiday that coincides with the uprising’s anniversary.

Few calls were heard this year for demonstrations or rallies to mark the uprising’s sixth anniversary.

On Jan. 25, 2011, Egyptians took to the streets in massive numbers to protest corruption and police brutality, both of which had been widespread under the Mubarak regime.

Following 18 days of unabated protests, Mubarak was eventually forced to step down and hand over power to the Egyptian military.

After only one year in office, however, the military ousted and imprisoned Morsi amid mounting protests against his struggling administration.

Ever since, Egypt’s army-backed authorities have waged a relentless crackdown on Morsi’s supporters and members of his Muslim Brotherhood, killing hundreds and throwing tens of thousands behind bars.

In late 2013, Egypt’s post-coup authorities officially designated the Brotherhood a "terrorist organization", accusing it of carrying out attacks against Egyptian security forces.

The following year, Abdel-Fattah al-Sisi -- the army chief who led the coup against Morsi -- assumed power in elections marred by numerous irregularities.

The embattled Muslim Brotherhood, for its part, says it remains committed to peaceful activism with a view to reversing the 2013 military coup.