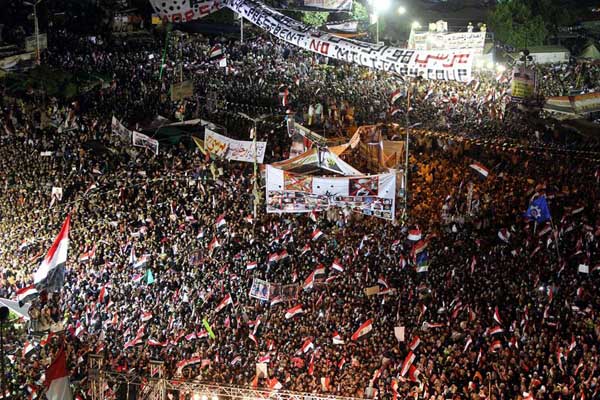 Egyptian army helicopters distributed leaflets to pro-Morsi protesters in Cairo's Nahda and Rabaa al-Adawiya square warning them off 'state and military institutions'. Protests against the military coup which ousted Egypt's first democratically elected president Mohammad Morsi have reached the level of becoming the largest since the Egyptian Revolution of 2011 on January 25. The army had full confidence in Egyptian youth and about their sincerity over the stability of the country, the leaflet read. "Those who will go home leaving the protests in the squares will not be investigated, and those who want to keep on the protests staying in the squares will be in safety," the leaflets said. Protesters were also warned about keeping themselves away from state and military institutions and were invited to be peaceful. The largest protest since Egyptian Revolution of 2011 Over 1 million pro-Morsi demonstrators across the country rallied at Rabaa al-Adawiya square in Cairo while others continued the sit-in protests just in front of the Republican Guard headquarters after 54 protesters seeking the return of Morsi to power were killed.

The number of Morsi supporters who took to the streets waiting for the return of deposed president Mohamed Morsi exceeded 2 million.

African Union will be the peacekeeper in Egypt

African Union (AU) said Saturday that they will act as the peacekeeper between the sides in Egypt.

The union said in a written statement that a commission chaired by Alpha Oumar Konare, former chairperson of the Commission of AU, would be formed to mediate between the groups aiming to speed up the democracy process in Egypt.

The AU had suspended Egypt from the continental body after the ousting of President Mohammed Morsi.