Presidency did not discuss such a proposal with Sisi, insisting it was just one of many proposals tabled to find a solution 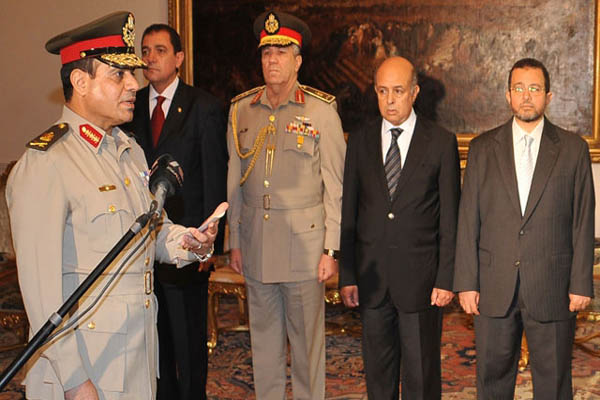 A prominent political figure has proposed to President Mohammad Morsi naming his Defense Minister Abdel Fattah El-Sisi as prime minister of an interim government as a way out of the current political impasse in the country. “The president listened to the proposal but did not give a clear position,” the politician, who attended a meeting between the president and representatives of 12 Islamic parties and forces late on Saturday. He proposed to the president that Sisi heads an interim government for six months to prepare for parliamentary elections and work on national reconciliation.

A group of politicians and thinkers had made the same proposal to the presidency last week as part of a six-point initiative, but did not get a clear answer.

They proposed that Sisi be tasked with forming a national unity government of technocrats while keeping his post as defense minister.

The government should have a clear mandate to maintain law and order, prepare for parliamentary elections before the end of 2013 and launch urgent economic rescue measures.

Under the initiative, the party that wins election and secures a parliamentary majority should be asked to form a new government.

If the opposition wins the parliamentary elections and forms the new government, early presidential elections must be held.

The initiative also asked the president to name an independent legal figure to head a special panel to propose amendments to the constitution based on talks with all political powers.

The final point of the initiative asked the president to clearly reaffirm commitment that appointments to all government posts must be based on competence not political affiliation.

A recent opinion poll by the Washington-based Zoghbi Institute found that 94% of Egyptians trusted the military establishment, while Morsi’s popularity plunged to 28% from 57% during his first year in office.

Mass proposes have been called on Sunday, the first anniversary for Morsi’s inauguration, to demand his resignation and call for early presidential elections.