Ecuador has declared more than a week of mourning to commemorate the victims of a devastating earthquake that killed nearly 700 and left nearly 17,000 wounded 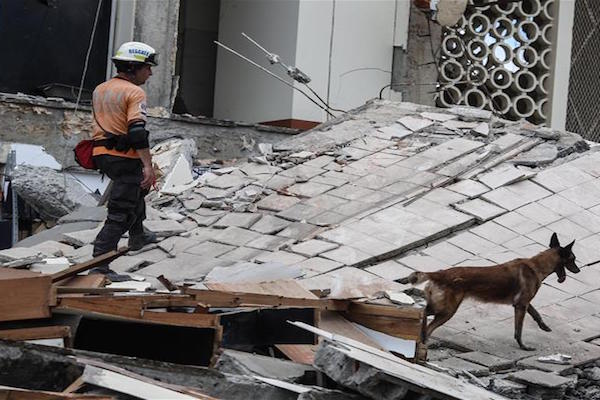 SANTO DOMINGO. Dom. Rep. (By Senabri Silvestre)-Ecuador has declared more than a week of mourning to commemorate the victims of a devastating earthquake that killed nearly 700 and left nearly 17,000 wounded. "It was a national tragedy. For the loss of life, for the suffering of these families, we will declare eight days of national mourning", President Rafael Correa said Saturday.

"Besides our solidarity with our brothers in Manabi, Esmeraldas, with the people who lived there – there were dead foreigners, among of them: Colombian, British, Canadians. In honor of those victims will declare eight days of national mourning", he added.

Correa lamented the dire situation Ecuador now faces but was able to see a silver lining in the timing of the magnitude-7.8 earthquake that struck the country’s northern coast last Saturday.

"If this emergency would have occurred 10 years ago, with the country we had, the misfortune would have been much worse” he said, referring to the ability of the nation to mount a response.

About 72 hours after the quake struck, Ecuador was able to establish water, health and safety services.

It also deployed to affected areas 882 national and foreign first responders and in use are mobile hospitals, 18 general mobile units for outpatient ambulatory visits and 52 ambulances.

The president encouraged citizens to be united more than ever as Ecuador faces its biggest emergency of the past 70 years, with losses that could reach into the billions of dollars. Correa has estimated $3 billion in damages.

As a result, the government has taken fiscal measures to help raise funds to deal with reconstruction efforts. Among of them, the increase of 2 points of the value added tax, currently set at 12 percent.

Also, workers who earn between $1,000 and $5,000 will be required to make a one-time donation of $33 at the lower end of the scale or $166 during the course of five months for those at the higher end.

The country hopes to collect between $600 million and $1 billion, according to Economic Minister Patricio Rivera.

Ecuador has already received $160 million of a $600 million line of credit opened by multilateral lenders.