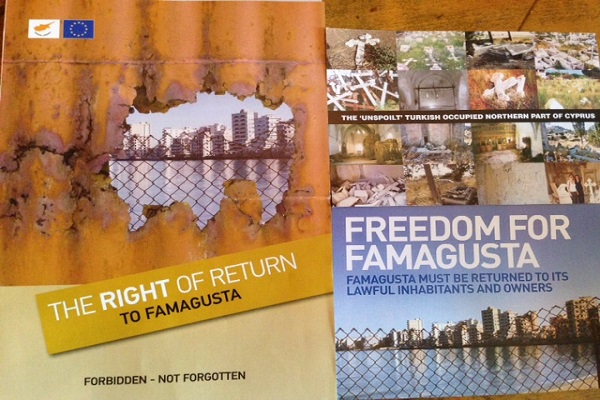 I would like to start this email by stating that I am a 28 year old, British Citizen born and bred in the UK. My father was born in Cyprus, in Kalahoryo and my mother born in the UK.

After the devastating events of 1974 my parent's family fled to what you refer to as the "occupied area". I prefer to call it

Northern Cyprus. My father now lives in Magusa, please note that I will call it Famagusta only for ease of reference so you understand what I am referring to.

I work in a predominantly Greek Cypriot office and have many friends who are Greek Cypriot and Greek mainland nationals. All of which I regard as my family.

I have always enjoyed attending any Cypriot related events and when I saw that a "Cyprus Wine Festival" had been organised at Alexandra Palace naturally I jumped at the opportunity to invite my family members. I was hoping to buy some traditional food, enjoy some wine and music, and see some of our Cypriot culture, so my family and I attended the event.

To my horror I was faced with something quiet opposite to what my expectations were.

When I qued to pay for my ticket. The first thing said to my family by the promoters of the event wearing a T-shirt with "Return Famagusta", on it was "please make sure you sign the petition for the return of Famagusta".

I declined to sign as I wasn't sure what the petition was really for and also a little shocked that such petitions could be promoted at a casual event such as the wine festival.

The person behind me asked him why we were asked to sign for Famagusta and his response was "to get it back". I assume he meant back from the so called "occupied side". This made me feel incredibly uncomfortable as the "occupied side" is where my family live, in Northern Cyprus.

Nevertheless we paid £35 for 5 of us and entered the event. We were again confronted with another person asking us to sign another petition. We expect to see stalls with food, and wine, but were instead greeted with photographic images of Greek Cypriots presumed missing hanging up on one of the stalls. The stall responsible for this was "Organisation of relatives of missing Cypriots (UK)"

Leaflets such as "The Right of Return to Famagusta" and "Famagusta: Turning a tragedy into an opportunity", "The Cultural Destruction of Occupied Cyprus" postcards, "Ten things you can do for

Cyprus" were being handed out.

This rather inappropriate display of missing persons ruined the event for us.

We went to this event in good faith ready to embrace our culture never contemplating that there would be any propaganda of any sort, especially since the event is called "Cyprus Wine festival". This

I presumed meant both parties, Greek and Turkish Cypriots.

I am disgusted to have to see this sort of brainwashing at festive events, which gives the false impression it is there to promote the Culture of the Cypriot people, but is in fact an opportunity to promote propaganda. It was uncomfortable being handed Carrier bags saying "Turkey-Guilty of:Invasion Occupation Ethnic Cleansing of Cyprus! Boycott Turkey!" and "Removal of all Turkish troops Repatriation of all Turkish colonists Return of all refugees".

We live in a democratic country here where we are regarded as equals and live as part of a free community. I find it unacceptable that every Greek event I have to attend, I am forced to feel uncomfortable because of events that took place in 1974.

If the Greek Cypriots actually wish to have some sort of a resolution and wish to reunite Cyprus and wish it to be recognised as The Republic Of Cyprus, then I propose approaching it in a way that embraces your fellow Turkish civilians in Cyprus and in the UK. The process then becomes more of a peaceful resolution rather than a process where constant bloodshed and taunting is used to further your cause.

I am not against lobbying and petitioning for change especially if it is something you believe in.

I like to think that I stand up for what I believe in and would do so for the good of my country, but what I am most definitely against is attending an event and having this propaganda openly thrown in my face, especially when I have invited my family and friends to enjoy my Cypriots culture. As much as Cyprus may be recognised by the Greek community as only being the Republic of Cyprus, We the

"occupied side" also feel it is our country. Turkish civilians who were once your neighbours want to live in harmony. Continuing to not recognise your fellow Cypriot neighbours is actually quitesickening. Both sides were displaced and became refugees. Both sides endured hardship and great losses. This is something that cannot be denied.

I would wish to draw your attention to the fact that I have attended many Turkish seminars in the UK and I have never come across any form of propaganda as extreme as the Greek community uses against their fellow countrymen.

I understand that both sides were heavily wounded, and both sides were displaced, but why oh why do we continue to have to force feed this down people's throats. I feel so ashamed to say that I am from Cyprus and this is due to the way this event has made me and my family feel.

A response to this email would be greatly appreciated.