A British F-35 fighter jet has crashed during a routine operation in the Mediterranean, the Ministry of Defence has said. 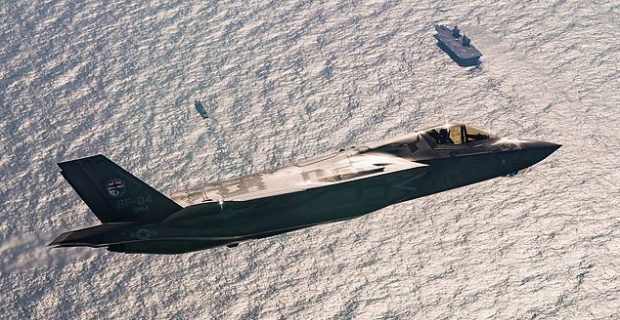 The pilot ejected and has safely returned to the Royal Navy aircraft carrier HMS Queen Elizabeth and an investigation has begun, the MoD added.The incident occurred at 10:00 GMT during flying operations in international waters while the carrier was sailing in the Mediterranean.No other aircraft was involved.

It was operated by the RAF's world-famous 617 Squadron, which was formed in 1943 for the Dambusters raid on German dams.Hostile action is not thought to have been involved, and an investigation is likely to focus on potential technical or human error. The pilot was rescued on a Merlin search and rescue chopper and is safely onboard the aircraft carrier.

A spokesperson for the Ministry of Defence said: "A British F35 pilot from HMS Queen Elizabeth ejected during routine flying operations in the Mediterranean this morning."The pilot has been safely returned to the ship and an investigation has begun, so it would be inappropriate to comment further at this time."

Keywords:
BREAKINGBritish F35F35 Fighter Crashes
Your comment has been forwarded to the administrator for approval.×
Warning! Will constitute a criminal offense, illegal, threatening, offensive, insulting and swearing, derogatory, defamatory, vulgar, pornographic, indecent, personality rights, damaging or similar nature in the nature of all kinds of financial content, legal, criminal and administrative responsibility for the content of the sender member / members are belong.
Related News